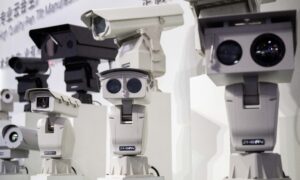 China Has the Most Surveilled Population in the World, UK Study Says
0 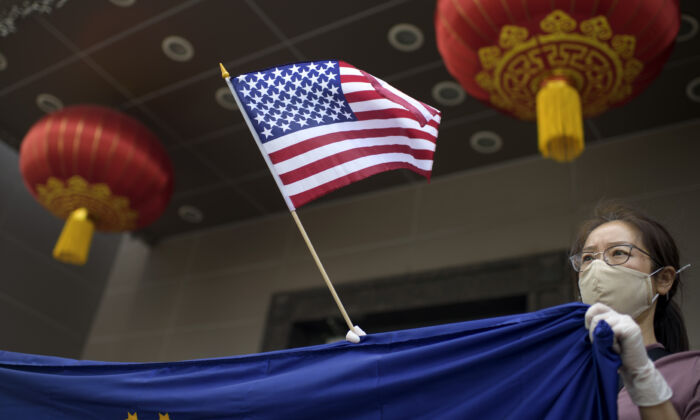 A protester holds a U.S. flag outside of the Chinese consulate in Houston on July 24, 2020, after the U.S. Department of State ordered China to close the consulate. (MARK FELIX/AFP /AFP via Getty Images)
Politics

WASHINGTON—China poses more of a threat to the free world than most Americans realize, and it’s time to stand up to the Chinese Communist Party (CCP), according to top Republican lawmakers and national security experts who gathered at a two-day conference on July 27 and 28.

The Freedom Summit, hosted by Liberty University’s Falkirk Center, highlighted the importance of holding China accountable for the CCP virus and the current economic recession.

The event, held at the Trump Hotel in Washington, came against a backdrop of rapidly deteriorating U.S.–China relations. The U.S. government has recently escalated its rhetoric and actions against the Chinese regime for its human rights violations, intellectual property theft, and military aggression.

Speaking at the conference, Sen. Tom Cotton (R-Ark.) said the Chinese regime “unleashed this plague on the world” because of its negligence and malevolence.

“The American people, I think, have seen the true face of Chinese communism,” he said.

According to Cotton, a long-time China hawk, there are ways to make the CCP pay directly and indirectly for the damages it has caused. One of them is to allow Americans to sue China in federal court for the outbreak by amending the Foreign Sovereign Immunities Act.

Cotton also introduced legislation that would provide incentives to companies to bring manufacturing onshore, such as tax subsidies or direct support.

“I think it is not a stretch to use the term that this is a Cold War,” she said at the conference.

Blackburn and Cotton introduced a bill in May to ban Chinese nationals from receiving U.S. student visas for science, technology, engineering, and mathematics research. Last week, Blackburn also published a white paper listing more than 120 recommendations on how to decouple from China.

“The CCP uses a variety of tactics to infiltrate our research communities,” she said, adding that Washington should cut off Beijing’s ties to U.S. colleges, universities, grant-making agencies, and think tanks.

Republican lawmakers including Blackburn condemned the ongoing riots in the United States, saying that the same Marxist philosophies used by the CCP are filling the streets of Portland, Chicago, and Washington.

Last week, the United States, in an unprecedented move, ordered the Chinese Consulate in Houston to close, accusing the facility of being a hub of spying and intellectual property theft.

Beijing retaliated by ordering the closing of the U.S. Consulate in the southwestern city of Chengdu.

The Trump administration blames China for stealing trade secrets of U.S. companies and most recently for its attempts to acquire COVID-19-related research.

“They’re actively hacking the computer systems of the people who are trying to develop a vaccine to protect the American people from the CCP virus,” White House trade adviser Peter Navarro said at the Liberty University event.

And what is more shocking, according to Navarro, is that Chinese officials “shook the president’s hand” during the signing ceremony of the U.S.–China phase one trade agreement at the White House on January 15.

“It would have been nice to tell us that there was a China virus with human-to-human transmission raging through China,” he said.

The Chinese regime has been accused of misleading and hiding information about the virus and the evidence of human-to-human transmission in the early days of the outbreak.

“China poses the single greatest geopolitical threat to the United States over the next century,” Sen. Ted Cruz (R-Texas) said at the conference. “They are fighting a 1,000-year war.”

“They are terrified to say anything bad about China,” he said. “That corruption is really deep and really profound.”

The paper “magically appears on the doorstep of every lawmaker on Capitol Hill,” Banks told The Epoch Times, questioning its source of funding.

Records from the U.S. Department of Justice showed that China Daily paid nearly $19 million to U.S. media companies for advertising in the past four years.

David Brat, a former U.S. congressman and dean of Liberty’s School of Business, hosted the Falkirk Center’s conference to help expose the true intentions of the Chinese regime.

“This event is dedicated to 1.4 billion Chinese who live behind the firewall, who don’t have liberty, who don’t have information, who are being repressed,” Brat told The Epoch Times.

According to Brat, the event is “an action conference to address accountability for the CCP, and to preserve and restore the rule of law, free-market economics, and Judeo-Christian principles in America.”

More than a dozen members of the House Freedom Caucus who also spoke at the conference sought to spotlight the CCP’s malign actions in the United States and around the world. They called for holding China accountable for spreading the virus that has killed more than 650,000 people worldwide and devastated the global economy.