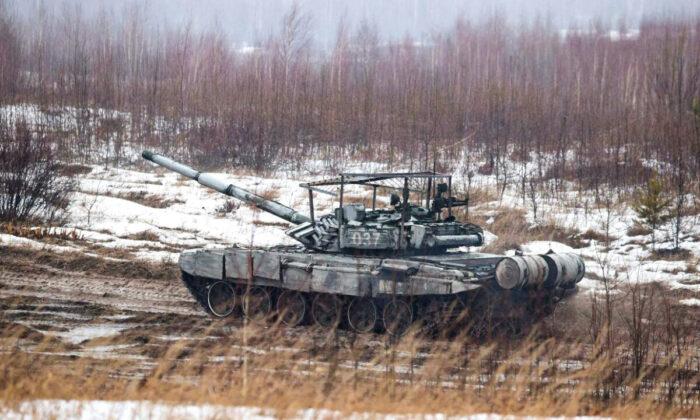 A tank moves along a field during joint exercises of the armed forces of Russia and Belarus near Minsk on February 17, 2022. (MAXIM GUCHEK/BELTA/AFP via Getty Images)
Russia-Ukraine War

The top Republican member of the House Intelligence Committee said that after Russia’s invasion of Ukraine, the United States would have to get involved if NATO members were attacked.

While the United States should not get involved directly, “we do play a role here that is very important,” said Rep. Mike Turner (R-Ohio).

“What we’re seeing is that Russia, under [Russian President Vladimir] Putin’s leadership, has invaded a validly elected democracy, an independent nation, violating international law,” Turner told Fox News on Friday. “It’s a threat to Europe and a threat to our NATO allies and therefore to the United States.”

Putin’s attack on Thursday marks the second time Russia has invaded Ukraine in about eight years. Previously, Putin was sanctioned by the Obama administration when he annexed Crimea in 2014.

The Russian leader “has openly stated that his goal is to reunite the geographical territory of the Soviet Union, and we should believe him,” Turner said, adding that “whenever you have a leader of a nation violating international law and openly threatening the world with weapons of mass destruction, we are entering a very difficult and very dangerous time.”

Turner further asserted that Putin has been emboldened over what he said is the Biden administration’s “weakness” during the U.S. withdrawal from Afghanistan as well as recent “mixed messages to Ukraine itself.”

During a Thursday speech, President Joe Biden said he would impose new sanctions on Russia in response to the invasion.

As for Putin, Biden told reporters: “He’s going to test the resolve of the West to see if we stay together. And we will.”

White House deputy national security adviser Daleep Singh on Thursday stressed that the Biden administration valued closed coordination with allies and avoiding even the perception of hurting ordinary Russian citizens as they roll out sanctions. He declined to detail a circumstance in which Biden might approve cutting the Russians off from SWIFT or target Putin directly.

“When we consider which sanctions to apply, we’re not cowboys and cowgirls pressing a button to impose costs,” Singh said. “We follow a set of principles. We want the sanctions to be impactful enough to demonstrate our resolve, and to show that we have the capacity to deliver overwhelming costs to Russia.”

On Friday, Russian forces were seen inside sections of Kyiv as local officials stressed that Moscow likely will try to mount an attack on the capital city late Friday night or early Saturday.