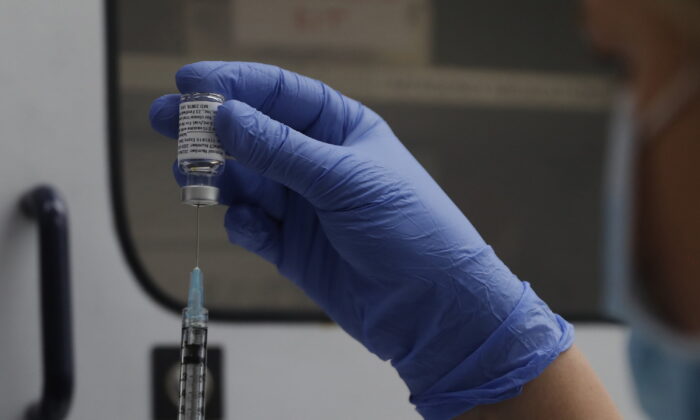 A vial of the Phase 3 Novavax coronavirus vaccine is seen ready for use in the trial at St. George's University hospital in London, Oct. 7, 2020. (AP Photo/Alastair Grant, File)
Vaccines & Safety

A top government regulator has said that Novavax’s spike protein-based COVID-19 vaccine listed severe allergies as a side effect, as the Food and Drug Administration (FDA) on Wednesday issued an emergency use authorization for the shot.

The European Medicines Agency on Thursday said that (pdf) severe allergic reactions could be potential side effects of the Novavax COVID-19 vaccine. In the United States, the vaccine’s product label warns against administering the shot to people with a history of allergic reactions to any of its components.

“The product information of Nuvaxovid will be updated with severe allergic reaction and unusual or decreased feeling in the skin as new side effects,” the EMA wrote, adding that “anaphylaxis (severe allergic reaction) will be included in the EU product information as a side effect of Nuvaxovid … together with an update of the existing advice for managing risk of anaphylaxis.”

It said that “a few cases” of anaphylaxis have been reported so far in connection to the vaccine. The EMA did not disclose the figure.

“Generally, cases reported spontaneously by a patient or healthcare professional concern suspected side effects, i.e. medical events that have been observed after vaccination,” said the agency, “but which are not necessarily related to or caused by the vaccine.”

A Novavax spokesperson told The Epoch Times Thursday that “this update is a warning commonly included for commercially available vaccines, including COVID-19 vaccines” and that “Novavax’s clinical development program reported no severe allergic reactions and therefore, this risk was not listed in the initial product label.”

“With broader deployment of doses, we have received reports of two cases of anaphylaxis (allergic reaction) that met a probable/definite case definition. Because anaphylaxis can occur with all vaccines and based on these cases, Novavax and the EMA agreed to update the label accordingly. We will continue to monitor all adverse events, including allergic reactions,” the statement added.

Shares of Novavax fell 22 percent to $54.31 as of 12 p.m. on Thursday, although analysts have said that Novavax shares are generally volatile.

In petitioning the FDA for an emergency use authorization, Novavax said it would market its vaccine to individuals who did not want to get the Pfizer, Moderna, or Johnson & Johnson shots. Pfizer and Moderna use mRNA technology for their shots, whereas Johnson & Johnson uses an adenovirus.

The FDA said that Novavax presented information from clinical trials that were carried out in early 2021, before the Delta and Omicron COVID-19 waves. Studies from around the world have suggested that Omicron and later sub-variants can easily evade vaccines as top officials, including COVID-19 adviser Anthony Fauci, have contracted the virus despite having received two booster shots.

“Authorizing an additional COVID-19 vaccine expands the available vaccine options for the prevention of COVID-19, including the most severe outcomes that can occur such as hospitalization and death,” FDA Commissioner Robert Califf said in a statement on Wednesday in authorizing the vaccine.

The agency said the vaccine, under the emergency use authorization, can be given to adults aged 18 years and older. The vaccine, which is given in two doses several weeks apart, can become available once the U.S. Centers for Disease Control and Prevention signs off on the FDA’s authorization.