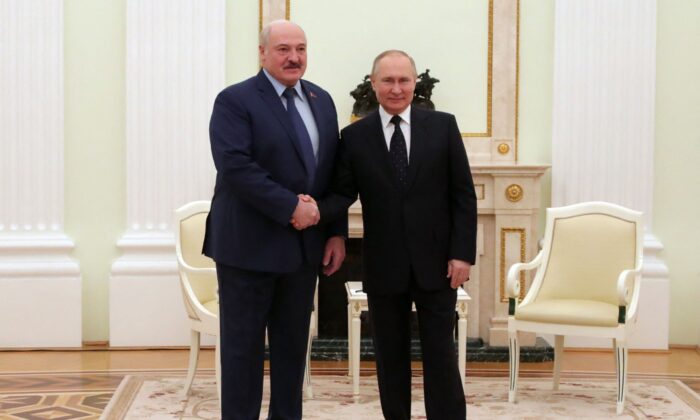 Belarus President Alexander Lukashenko said in a May 5 interview that the Russia–Ukraine conflict is dragging on longer than he expected, although he defended Moscow’s incursion.

Asserting that the Kyiv government was “provoking Russia,” Lukashenko told The Associated Press that he’s “not immersed in this problem enough to say whether it goes according to plan, like the Russians say, or like I feel it.”

“I want to stress one more time: I feel like this operation has dragged on,” he told the outlet, describing the conflict as a “war” several times in his interview. Russian President Vladimir Putin, he said, isn’t trying to seek a conflict with NATO and that it’s Washington that is fueling the conflict.

Before the invasion began on Feb. 24, Belarus allowed Russia to stage some of its forces along the country’s border with Ukraine. Russia also has significant supply lines throughout Belarus, which is considered one of Russia’s closest allies, although Lukashenko has stated that his military won’t join the conflict.

Because of Lukashenko’s support for his ally, Belarus has faced even more sanctions from the United States and Europe. The United States suspended all its embassy services in the Belarusian capital of Minsk after the conflict started.

“We categorically do not accept any war,” added Lukashenko, who has ruled Belarus since the early 1990s. “We have done and are doing everything now so that there isn’t a war. Thanks to yours truly, me that is, negotiations between Ukraine and Russia have begun.”

Meanwhile, he called on Russia and the West to not use nuclear weapons, saying that such a move is “unacceptable” because Ukraine is “right next” to Belarus.

“It is also unacceptable because it might knock our terrestrial ball flying off the orbit to who knows where,” he said. “Whether or not Russia is capable of that—is a question you need to ask the Russian leadership.”

Lukashenko also said that Belarus posed no threat to its neighbors or other countries amid reports that his country carried out military exercises this week.

“We do not threaten anyone, and we are not going to threaten and will not do it. Moreover, we can’t threaten … we know who opposes us, so to unleash some kind of a conflict, some kind of war here … is absolutely not in the interests of the Belarusian state. So, the West can sleep peacefully,” he said.

Ukrainian presidential adviser Oleksiy Arestovych told media outlets on May 5 that Ukrainian forces have repelled Russian troops who are attempting to seize the Azovstal steelworks plant in Mariupol—the site of heavy fighting in recent days.

“We can say that yesterday, Russian troops entered the territory of Azovstal and were repelled by our defenders,” he said. “Negotiations with Russia are ongoing [on new evacuation corridors], and all the diplomatic authorities are involved.”