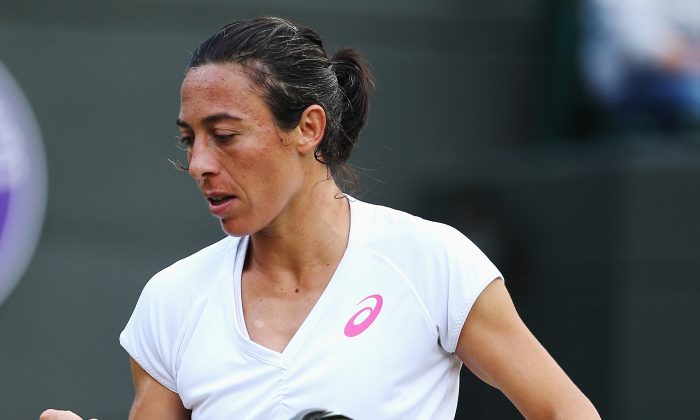 Francesca Schiavone of Italy in action during her Ladies' Singles first round match against Ana Ivanovic of Serbia on day two of the Wimbledon Lawn Tennis Championships at the All England Lawn Tennis and Croquet Club at Wimbledon on June 24, 2014 in London, England. (Jan Kruger/Getty Images)
Hong Kong

Twenty-four of the world’s top 100 Tennis players have entered the Prudential Hong Kong open to be played at Victoria Park Tennis Stadium from Sept 8 to 14. The tournament will feature a 32-person singles and 16-team doubles competitions fighting for the US$250,000 prize money.

Former French Open winner, Italian Francesca Schiavone and Daniela Hantuchova of Slovakia winner of 5-singles titles from 2002 to 2013 are among the older generation players to enter the tournament. From the younger set Canadian up and coming 20-year-old Eugenie Bouchard (currently ranked 8th in the world) and 22-year-olds: American Mchale Christina (50) and Japan’s Kurumi Nara (33) have entered the singles competition.

Many other notable names including Zhang Suai, Peng Suai and Zheng Jie of China and Yanina Wickmayer of Belgium are listed to play.

“We are thrilled that a significant number of the world’s top female tennis players have confirmed coming to Hong Kong for the tournament,” said Herbert Chow, President, Hong Kong Tennis Association in a press release.