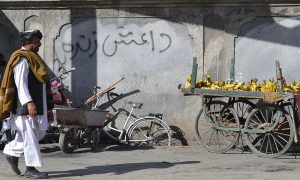 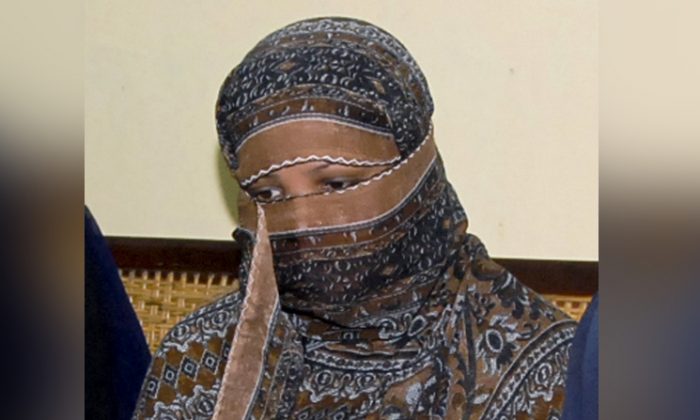 Aasia Bibi, a Pakistani Christian woman, listens to officials at a prison in Sheikhupura near Lahore, Pakistan on Nov. 20, 2010. (AP Photo)
Asia & Pacific

ISLAMABAD—Pakistan’s top court on Jan. 29, upheld its acquittal of a Christian woman sentenced to death for blasphemy, paving the way for Aasia Bibi to leave the country in a blow to radical Islamists who had demanded her execution.

Following the landmark decision, Bibi will finally be able to join her daughters, who earlier fled to Canada where they have been given asylum.

Bibi’s lawyer, Saiful Malook, who returned to Islamabad after fleeing the country amid death threats, called the decision a victory for Pakistan’s constitution and rule of law.

The three-judge Supreme Court panel had “insisted on very strict proofs of blasphemy” and found none, Malook said, expressing hope that Bibi’s acquittal will deter false blasphemy allegations in the future.

Pakistan’s blasphemy law is often used to settle scores or intimidate followers of minority religions, including Shiite Muslims. A charge of insulting Islam can bring the death penalty, and the mere accusation of blasphemy is sometimes enough to whip up vengeful mobs, even if courts acquit defendants. A provincial governor who defended Bibi was shot and killed, as was a government minority minister who dared question the blasphemy law.

From her secret location, Bibi watched the decision reported live on local television, according to a friend who spoke to her as it was being announced. Bibi’s first thoughts were for her daughters, the friend said, speaking on condition of anonymity because he fears reprisals from Islamic extremists.

“I am really grateful to everybody. Now after nine years it is confirmed that I am free and I will be going to hug my daughters,” he quoted Bibi as saying.

Pakistan’s Chief Justice Asif Saeed Khan Khosa led the panel that dismissed the petition asking the court to review its Oct. 31 acquittal of Bibi and to send her back to prison and eventual execution. He said in court that Bibi’s accusers were guilty of perjury and if the case had not been so sensitive, they should have been jailed for life.

Much of the evidence presented against Bibi was suspicious, and some of it appeared to be fabricated, he said, adding that the cleric who lodged the initial charge of blasphemy gave contradictory statements that were unchallenged in the trial.

Following Bibi’s initial acquittal, radical religious parties took to the streets in mass protests, calling for the killing of the judges behind the ruling and for the overthrow of Prime Minister Imran Khan’s government. They also filed the last-minute appeal for a review of the acquittal. The protests were spearheaded by the radical Tehreek-e-Labbaik party.

Security at the court was high Tuesday, with riot police in full gear around the building and rolls of concertina wire ready to be strung out along main roads. Police stopped and searched cars on the road outside the court while officers and plainclothes security agents were deployed inside the building.

Joseph Francis, a Christian activist who attended Tuesday’s hearing, said the decision was good news for Pakistan’s minority Christian community. “I am happy because the judges spoke out strongly against giving false evidence,” Francis said.

Bibi, who always insisted that she was innocent, has said she will leave the country as soon as her legal battles are over.

Bibi’s ordeal began on a hot day in 2009 when she brought water to fellow farmhands who refused to drink from the same container as a Christian woman. Two of her fellow farmworkers argued with Bibi and later accused her of insulting Islam’s prophet.

Following protests after Bibi’s acquittal, the authorities arrested radical clerics Khadim Hussain Rizvi and Mohammad Afzal Qadri, both leaders of the Tehreek-e-Labbaik Party, and several of their followers for destroying public property during rallies against Bibi and for inciting their followers to violence. The clerics and the others remain in custody.