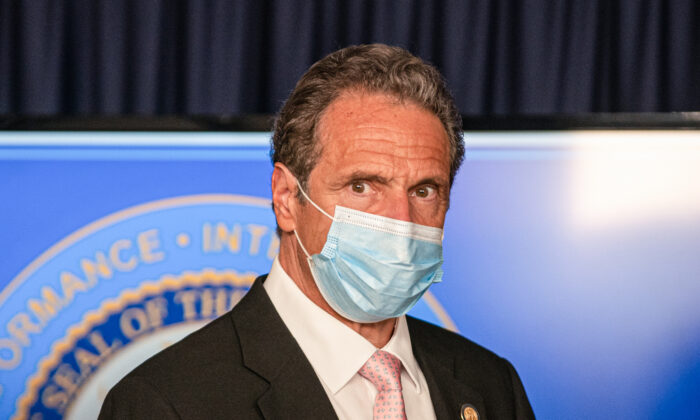 NY Governor Andrew Cuomo (R) attends the daily media briefing at the Office of the Governor of the State of New York on June 12, 2020. (Jeenah Moon/Getty Images)
US News

Cuomo’s office hasn’t responded to the claim that the aide, Secretary to the Governor Melissa DeRosa, apologized to state Democratic lawmakers for withholding the true nursing home death toll. The Epoch Times has reached out to his office for comment.

Rep. Elise Stefanik (R-N.Y.) said in a statement that “Cuomo, the Secretary to the Governor, and his senior team must be prosecuted immediately—both by the Attorney General of New York State and the U.S. Department of Justice.”

“This bombshell admission of a coverup and the remarks by the Secretary to the Governor indicating intent to obstruct any federal investigation is a stunning and criminal abuse of power,” she went on to say. “The families who lost loved ones, New Yorkers, and all Americans deserve accountability from the U.S. Department of Justice that will be independent and not swayed by the desperate political pressure from Governor Cuomo.”

According to the NY Post’s report, DeRosa allegedly said to lawmakers that the Cuomo government ignored a request to tally the death toll last August “right around the same time, [then-President Donald Trump] turns this into a giant political football.” The Post obtained audio of her comments.

DeRosa then noted that Trump directed “the Department of Justice to do an investigation into us,” adding: “And basically, we froze.”

“The second most powerful person in state government and top aide to Governor Cuomo admitted on video to the premeditated and willful violation of state laws and what clearly amounts to federal obstruction of justice,” Langworthy said in a statement Thursday. “Andrew Cuomo has abused his power and destroyed the trust placed in the office of governor. Prosecution and impeachment discussions must begin right away.”

Rep. Andrew Garbarino (R-N.Y.) said that “answers and justice” are needed via a “full investigation” by the Justice Department “into the Cuomo Administration’s handling of nursing homes and COVID-19.”

“Cuomo not only recklessly put New York seniors in harms’ way, he and his Administration admittedly hid the facts from the Department of Justice,” Garbarino stated. “This, along with the refusal to respect the several Freedom of Information Law requests, turned a misjudgment in policy into what very well may be one of the largest criminal cover-ups in New York’s history.”

State lawmakers also joined in, with Assemblyman Doug Smith, a Republican, noting that Cuomo’s “repeated cover up of the deadly consequences of his March 25th order may be criminal.”