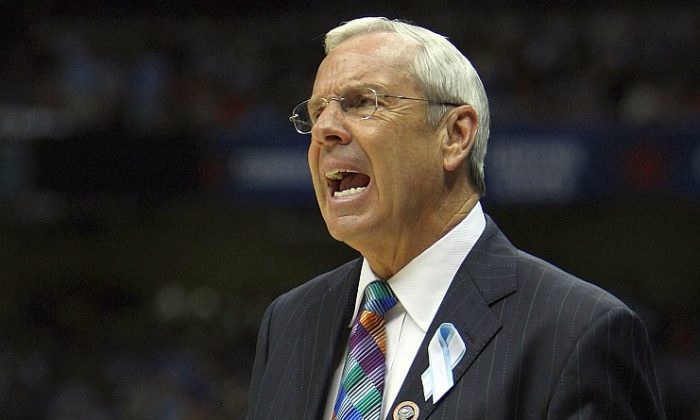 With another top-seed billing for Roy Williams's club in 2012, Williams now has 10 career No. 1 seed appearances in the NCAA tournament and has advanced to the Final Four in four of the previous nine times. (Jed Jacobsohn/Getty Images)
College Sports

With the 2012 NCAA tournament now underway, chances are most college basketball fans have filled out their tournament predictions and entered their brackets in a pool.

Plenty of casual fans have likely filled out theirs as well, and though they probably haven’t seen a minute of basketball this season, it won’t matter much. Why? Most fans who’ve followed the game and tournament for even as little as a few years already know this: The sudden-death, neutral-court format that is the NCAA tournament is virtually unpredictable—hence the term “March Madness.”

Unlike professional sports, where the teams who had the best regular season get home-court advantage in the playoffs, NCAA top teams instead find themselves at neutral sites. Though any team’s fans can show up and root for their favorite, most neutral fans at these sites root for the unexpected—the upset.

Since the tournament expanded to 64 teams in 1985, the only sure bet has been that each top seed would advance to the round of 32, having never lost. Yet, picking the top seeds to advance to the Final Four is not a sure thing.

From 1985 to 2011, 45 top seeds made it to the Final Four in 108 chances. Just 42 percent of teams the selection committees had determined to be the best on a yearly basis even made it out of their region, and only once during that period (in 2008) did all four top teams meet in the Final Four together.

North Carolina has been the surest proposition of all of them, winning their region 7 of 10 times as a top seed over the span of four different coaches. Only the 1987, 1994, and 2007 teams failed to make the Final Four as No. 1 seeds.

The current coach of the Tar Heels, Roy Williams, has advanced his team out of its region three times in four tries as the No. 1 seed, after going just one-for-five in his time at Kansas.

Thanks to his record at Kansas, as well as current coach Bill Self’s one-for-four mark, the Jayhawks are one of the worst teams at wilting under the pressure of high expectations. Of those 10 top-seed appearances, KU won its region just three times.

Though Mike Krzyzewski has 11 Final Four appearances to his credit (most since 1985), the Blue Devils have only made it out of its region half the time, advancing in 6 of their 12 No. 1 seed tries.

Their most famous regional win was in 1992 against Kentucky, when Christian Laettner’s fadeaway jumper at the buzzer gave them a chance to repeat as champions. Kentucky hasn’t fared well as top seed either. Only in three of their eight times as the No. 1 seed has Kentucky ran the table in its region, while failing in each of their last three bids (2010, 2004, and 2003).

Naturally, the uncertainty of whether the best teams will advance adds a lot of excitement to the tournament and is one reason March Madness is so popular.