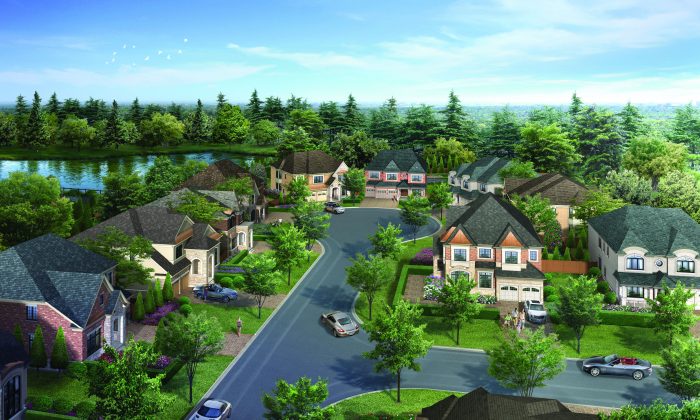 Rendering of a streetscape in The Enclave, a new phase at CountryWide's Upper Thornhill Estates community in Vaughan, Ontario. (Courtesy of CountryWide)
Canadian Content

CountryWide Homes is headed for a record-breaking year in sales, the company’s sales and marketing manager Richard Mariani tells us. “And that’s mostly attributable to the fact we have prime locations with premium product. If you want to live north of the city in the GTA, we’ve probably got some of the best locations available.”

Asian buyers account for a “substantial” part of the company’s sales, he says, especially at its new-home communities along Bayview and Leslie Streets and up the Highway 404 corridor as far north as Queensville.

That’s where CountryWide recently launched a townhouse and single-family home development at Leslie Street and Queensville Side Road, dubbed Queensville, with 95 units selling from the $500,000s.

“The price point is much more affordable than anywhere in the city,” Mariani points out. “It’s farther north, but it’s just above Newmarket and has great access to the highway. The GO station is five minutes away, so if you want to commute downtown you have that ability.”

Down Leslie Street in Aurora, on Sept. 26 CountryWide released a new phase at The Arbors, a collection of freehold single family homes with modern brick, stone, stucco exteriors that range from 2,100 to 3,400 square feet, on lots from 36′ to 45′. (Additional 36′ and 45′ ravine lots will be released Oct. 10).

In Thornhill, the company just launched Otto, a collection of 101 modern townhouses at Bayview Avenue and John Street priced from the upper $800,000s. These modern homes feature architecture “steeped in influences from the Bauhaus Movement and Nordic Europe’s whimsical yet structural form,” the project’s brochure notes.

“These homes are for people who are condo dwellers today but want to upsize,” he says. “They’re ready for the next stage of life and this is the perfect fit. It’s got the modern-contemporary style and feel they’re used to but it’s a bigger space.”

He notes that townhomes along John Street will be live-work, enabling self-employed residents to set up shop in the comfort of their home.

Over on Bathurst Street just north of Major MacKenzie Drive, CountryWide this month launches The Enclave, a new phase at its Upper Thornhill Estates community.

The community is nestled in a conservation area, complete with pine forests, winding creeks and trails. And the 27 homes being released for sale are on 50′ and 60′ lots that are “set in the nicest part of the pocket of the whole subdivision,” Mariani says.

Prices start from around $2 million and go north from there, but there’s the potential for big upside here, he points out. “The value of the homes at Upper Thornhill Estates has more than
doubled in the past 10 years.”