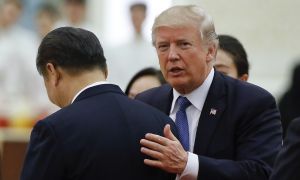 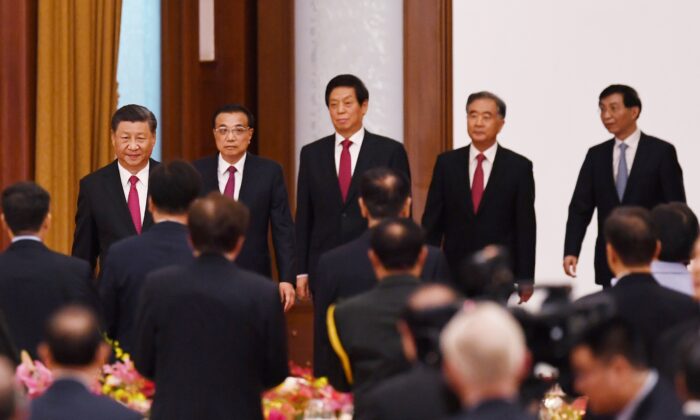 However, state-run media has sought to conceal the crises by focusing on Party leader Xi Jinping’s competence and authority.

Beijing’s mouthpiece Xinhua reported that Xi’s core leadership in 2020 “has united the Chinese people of all ethnic groups to tackle the risks and challenges rarely seen in history and has led them to a decisive victory.”

In fact, the regime did a terrible job in 2020. And to cover the embarrassment, Xinhua was most likely ordered by top-level officials to emphasize the severity of the situation that the CCP faces both at home and abroad, and to highlight Xi’s role in overcoming the obstacles.

Xinhua described 2020 as a very unusual year “in the history of the Chinese nation and in human history.”

Its report stated: “The external environment is turbulent with a series of challenges in politics, economics, the military, society, international relations, etc.” As the obstacles began to grow “as big as Mount Tai,” the central government “evaluated beforehand, made sound judgment,” and did a great job in this “very unusual year.”

Mount Tai, located in the city of Tai’an, in Shandong Province, is one of China’s most sacred mountains, with historic and cultural significance.

Xi also referenced Mount Tai to describe China’s unprecedented challenges in a speech he delivered at an event to commemorate the 75th anniversary of the United Nations on Sept. 21, 2020. I suspect that his statement made all CCP cadres feel very pessimistic about their country’s situation.

Xinhua also stated the central Politburo believes that “leadership is the most critical factor in the face of major historical junctures and tests,” and affirms “Xi Jinping’s core position in the entire Party, the authority and unified leadership of the Party Central Committee.”

By praising Xi, Xinhua is indirectly hinting that his authority has weakened; to conceal this crisis, it emphasized the “core” and “centralized unified leadership.” CCP officials at all levels should have seen this unprecedented crisis and should be thinking about retreating. Senior officials are helpless and openly admit that the Party is in a difficult situation, which will cause other officials to feel even more hopeless.

This mentality can be observed from the fact that the year-end meeting continued to promote the same, old illusory slogans of the 14th Five-Year Plan, the 2035 vision, and the high-quality development strategy. Political slogans and clichés can no longer motivate the authorities, even though some may still expect the top officials to devise a strategy that can hopefully overcome the difficulties.

Xi, who expects loyalty from CCP cadres, told them to closely follow the CCP’s founding mission and regard it as a “life-long task,” and expects them to understand “the overall political situation.” But Xi didn’t describe the “situation” nor did he offer guidance on how to remove the obstacles that continue to grow as big as Mount Tai.

Xi also requires members of the Politburo to make “strategic, systematic, and forward-looking research plans.” But who, within the CCP, can really create such plans?

Over the past year, in the face of domestic and international obstacles, senior CCP officials were unable to come up with effective strategies. What they are most concerned about is their position and authority, and specifically, political security.

The CCP met its own demise in 2020 due to its reckless actions, such as its mishandling of COVID-19 when it first emerged, seeking hegemony, taking away Hong Kong’s autonomy and implementing the national security law in the city, and interfering in the U.S. presidential election.

The top CCP leaders are still trying to cover up a series of mistakes and will never allow anyone to question them. Naturally, it’s difficult for anyone within the regime to put forward a truly effective plan to tackle the crises.

The ineffective Politburo meeting at the end of 2020 set the direction for the CCP’s destiny in the new year.