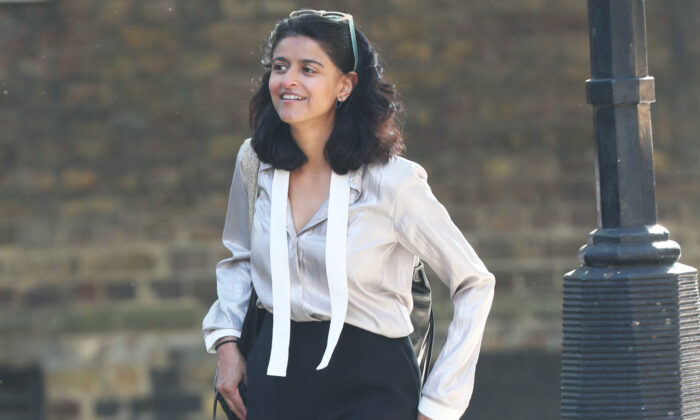 Undated photo of Munira Mirza, director of the No. 10 Policy Unit, arriving at 10 Downing Street in London. (Yui Mok/PA)
UK

In a heated exchange in the House of Commons on Jan. 31, as Johnson came under pressure over alleged COVID-19 lockdown breaches on Downing Street, he accused the opposition leader, a former chief state prosecutor, of using his time for “prosecuting journalists and failing to prosecute Jimmy Savile,” one of the UK’s most egregious sex offenders, before his death in 2011.

As director of public prosecutions, Starmer apologised in 2013 on behalf of the Crown Prosecution Service (CPS) for failing to prosecute Savile. But there’s no evidence that he had any personal role in the failure.

Amid criticisms from both opposition and Conservative MPs, Johnson backed down on Feb. 3, acknowledging that Starmer “had nothing to do personally with those decisions.”

But according to Mirza’s resignation letter, as reported by The Spectator, the prime minister stopped short of issuing the apology that she had requested.

“I believe it was wrong for you to imply this week that Keir Starmer was personally responsible for allowing Jimmy Savile to escape justice,” Mirza wrote in the letter to Johnson. “There was no fair or reasonable basis for that assertion. This was not the usual cut and thrust of politics; it was an inappropriate and partisan reference to a horrendous case of child sex abuse.

“You tried to clarify your position today but, despite my urging, you did not apologise for the misleading impression you gave.

“You are a better man than many of your detractors will ever understand which is why it is so desperately sad that you let yourself down by making a scurrilous accusation against the Leader of the Opposition.”

Mirza was one of Johnson’s most loyal allies and had worked with him for more than a decade.

Her departure is a fresh blow to Johnson, who has been mired in a political crisis triggered by a series of allegations of parties and other gatherings being held on Downing Street, including in his flat, in violation of CCP virus restrictions imposed by his own government.

He has faced calls for his resignation not only from opposition parties but also from 13 of his own backbench Conservative MPs.

A spokesman said Downing Street was “very sorry” to see Mirza quit and was “grateful for her service and contribution to government.”

Conservative MP Andrew Griffith has been appointed as minister for policy and head of the Prime Minister’s Policy Unit.