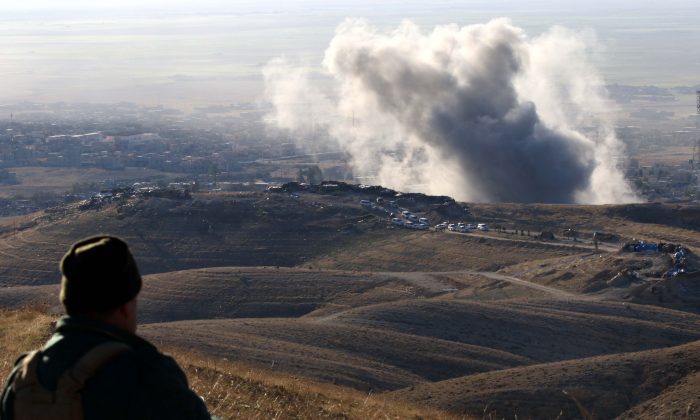 Heavy smoke billows from the northern Iraqi town of Sinjar, Mosul province, during an operation by Iraqi Kurdish forces backed by US-led strikes on November 12, 2015, to retake the town from the Islamic State group and cut a key supply line to Syria. (SAFIN HAMED/AFP/Getty Images)
Asia & Pacific

The head of a Libyan Islamic State (ISIS) affiliate was killed during an airstrike on Friday, the Pentagon said. A U.S. airstrike targeted leader Wissam Najm Abd Zayd al-Zubaydi, also known asAbu Nabil, at a compound in Derna. He was “longtime al-Qaeda operative and the senior Islamic State of Iraq,” the Department of Defense said in a statement.

“Reporting suggests Nabil may have been the spokesman in ISIL’s February Coptic Christian execution video,” the news release said. ISIL is the American government’s name for ISIS. In February, a group affiliated with ISIS released a video showing dozens of Christians being executed on the beach.

These pics shared with the news that a U.S. airstrike killed leader of IS in #Libya Abu Nabil, aka Wissam al Zubaydi pic.twitter.com/opptgUi7Gr

The Pentagon said it wasn’t the first time the U.S. used airstrikes against terrorists in Libya, but it’s the first strike against an ISIS leader in the country. “It demonstrates that the United States will go after ISIL leaders wherever they operate,” the release said.

American officials told Reuters that the airstrike was carried out by two F-15 aircraft.

The operation was authorized before the terrorist attacks in Paris that left more than 128 people dead on Friday, the Pentagon stated.

ISIS claimed responsibility for the Paris attacks. A White House statement said a National Security Council briefing with President Barack Obama “had no information to contradict the initial French assessment of [Isis] responsibility,” according to a statement.

The U.S. military also said it is “reasonably confident” a Hellfire missile fired from a drone near Raqqa killed Mohammed Emwazi, the U.K. man who was dubbed “Jihadi John,” and who was recorded killing ISIS hostages.

In 2011, Libya descended into chaos after the fall of longtime strongman Moammar Gadhafi during its revolution. International Criminal Court chief prosecutor Fatou Bensouda has said that in Gadhafi’s wake, ISIS is killing the most civilians but other militant groups are carrying out “large-scale crimes.”