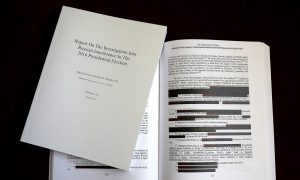 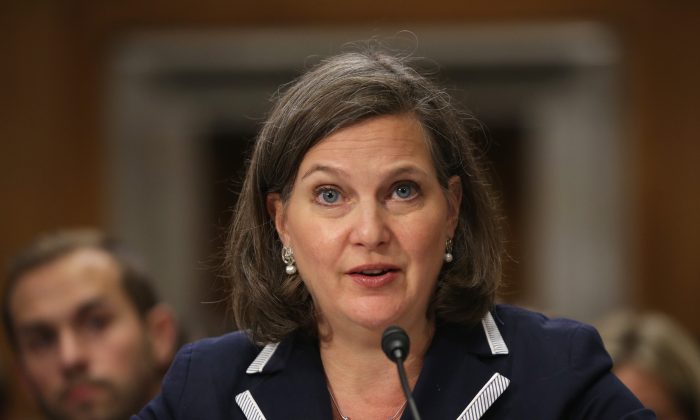 A series of emails between Sept. 26, 2016, and Dec. 10, 2016, demonstrate that Winer shared “Russia-related information” he obtained from Steele—whom he described as his “old O friend”—with Nuland, who then shared it with Silverberg.

Winer delayed a previously scheduled meeting with the State Department’s Bureau of Intelligence and Research (INR) in order to share the information with Nuland, according to Judicial Watch.

Multiple references in the emails to additional telephone calls and other contacts with unnamed or redacted parties, as well as discussion of “a possible working group meeting,” suggest an active response by Silverberg to the Steele dossier information he was provided by Nuland and Winer.

Steele’s firm was named Orbis Business Intelligence. He is the former British spy who created the infamous dossier bearing his name based on “salacious and unverified” information obtained from Russian intelligence sources alleging improper contacts and activities involving President Donald Trump during the 2016 campaign.

In a Nov. 28, 2016, email, Silverberg—while addressing Nuland as “Toria”—said: “It was a delight to speak today, notwithstanding the context. You’ve been a warrior on these issues, and I look forward to speaking further to preserve and wherever possible strengthen the important work you have done. I’ll follow up regarding a possible working group meeting.”

Nuland responded the next day, copying Winer and saying: “Thanks, Daniel. I look forward to continuing our collaboration in whatever capacity life brings. Copied here is Jonathan Winer, who has some legal ideas that may be of interest to you and Cong. Hoyer.”

Silverberg told Winer: “Great. Jonathan, I am all ears.”

In a Dec. 10, 2016, email, Winer tells Silverberg: “I’ve reached out per our call yesterday. Please call me to talk further at your early convenience. Weekend best but can also talk Monday.”

“These documents further confirm the Obama State Department was obviously a way station for Steele’s smear dossier and other anti-Trump activism,” Judicial Watch President Tom Fitton said in a statement.

As of press time, Silverberg didn’t respond to The Epoch Times’ email request for comment.

Judicial Watch obtained the documents as a result of its April 25, 2018, lawsuit against the Department of State, after the government failed to respond to three separate Freedom of Information Act (FOIA) requests from the nonprofit government watchdog.

Among the senators receiving those documents were Sen. Mark Warner (D-Va.); the ranking Democrat on the Senate Intelligence Committee, Sen. Ben Cardin (D-Md.); and then-Sen. Robert Corker (R-Tenn.). Corker, who didn’t seek re-election in 2018, was chairman of the Senate Foreign Relations Committee.

The documents also showed “Russian political interference in elections and politics in countries across Europe. In a section of the documents provided to Cardin, titled ‘Political Parties’ and marked as sensitive, Russia reportedly sought to foster relationships with groups in Germany, Austria, and France, to include paying members to travel to conferences in Crimea and Donbas, ‘where they stoutly defend Russian policy,’” Judicial Watch said.