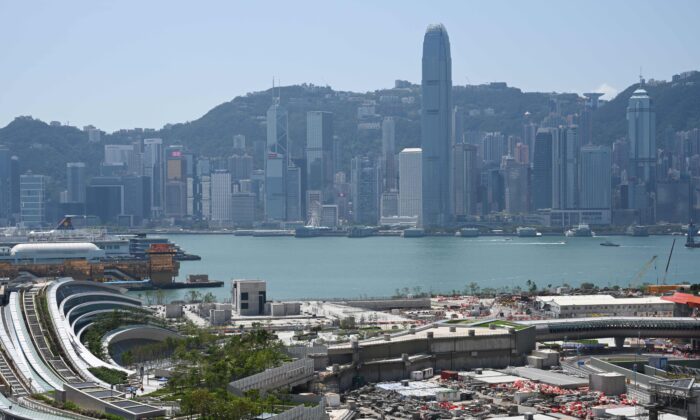 The harborfront West Kowloon train station (L) in Hong Kong for the high speed rail link to Guangzhou in mainland China, and the skyline of Hong Kong Island (back) on Sept. 21, 2018. (Anthony Wallace/AFP via Getty Images)
Hong Kong

A human rights organization reported that a number of  pro-Beijing, top officials in Hong Kong, who seriously violate human rights, own properties and hidden assets outside the country. The rights group urged those countries to follow the example of sanctions against Russia and launch a sanction list against the named Chinese officials.

All the named officials swore allegiance to the Chinese Communist Party (CCP) and publicly supported the Hong Kong National Security Law. They have been suppressing Hong Kong social activists, press freedom, and civil society in the name of working against “foreign forces.”

These politicians are so called “patriots,” a name first brought up by former CCP leader Deng Xiaoping before the handover of Hong Kong sovereignty. During the Sino-British negotiation in June 1984, Deng Xiaoping clarified that the  “Hong Kong government will be mainly formed by patriots,” “Hong Kong people administering Hong Kong has a limit and standard, they must be patriots in Hong Kong.”

Among the 153 candidates in the current Legislative Council election, the vast majority are in the Pro-establishment camp. Less than 10 percent are regarded as Opposition camp or Pro-democracy camp, such as Civil Party and the Democratic Party. “Patriots ruling Hong Kong” in shorts means that Hong Kong is governed only by those who support the CCP regime.

The British report criticized the “hypocrisy” of these Hong Kong “patriotic” officials owning properties abroad, and proposed that all the identified countries consider reviewing these officials’ assets and drawing up a sanctions list.

Sam Goodman, senior policy adviser to Hong Kong Watch, said in an interview with Radio Free Asia that these self-claimed “patriotic” legislators and executive council members are happy to own properties in foreign countries, send their children to study abroad, and hide their wealth under foreign accounts, all things that are obviously hypocritical.

Goodman sees this hypocrisy as that of Russian oligarchs. He called for “Western governments to learn from Russia and impose specific sanctions on officials believed to have committed serious human rights abuses.

Goodman also said that these Hong Kong officials, who violate human rights, will vote for legislation to pass the Article 23 National Security Law of the Basic Law, as well as the Fake News Law and the Anti-Espionage Law, further weakening Hong Kong’s democracy and freedom.

Goodman urged the UK, the United States, Canada, Australia, and Japan to immediately set up sanctions lists to prevent officials and legislative council members from accessing their Western properties, bank accounts, and assets.

Lord Alton said that while the British government was tracking the assets of the Russian rulers in the UK, government ministers should also adopt the Hong Kong Watch recommendations to review the UK assets held by Hong Kong and Chinese officials.

“It is long overdue for the British government to take the lead on this issue and develop a sanctions list covering officials named by Hong Kong Watch,” he said.

Ironically, these officials with assets overseas also demanded the confiscation of the assets of Hong Kong dissidents “as punishment for our fight for freedom and democracy,” said Hui Chi-fung.

Hong Kong Watch was established in 2017 to monitor the conditions of human rights, freedoms, and rule of law in Hong Kong, and urge the CCP to abide by its commitments to the Hong Kong people in the Sino-British Join Declaration.