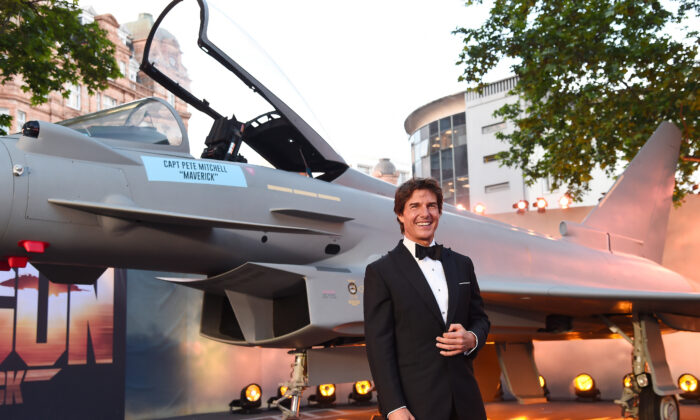 The new film “Top Gun: Maverick” is earning praise not only for being better than its 1986 predecessor, but for standing up to the Chinese Communist Party, after the film’s producers reinstated a Taiwanese flag on the bomber jacket worn by Tom Cruise’s Navy pilot character.

In the original “Top Gun” film, Cruise’s character, Pete “Maverick” Mitchell, wears a bomber jacket with Taiwanese and Japanese flag patches. However, both flags were replaced with emblems when the sequel released a trailer in 2019.

Since then, there has been speculation that the Chinese Communist Party (CCP) may have influenced the decision to remove the flags, as the movie was partly produced by Tencent Pictures, the film-making arm of Chinese tech giant Tencent. The company is known for complying with Beijing’s censorship rules in China and extending its monitoring and censorship to U.S. users through its popular messaging app WeChat.

The flags have reappeared in the version of the film released worldwide last week. As of May 30, the film had grossed $156 million in the United States and $282 million worldwide.

In Taiwan, the “Top Gun” sequel has also been a hit, grossing over NT$81.5 million (about $2.8 million) in the five days after its May 25 release, according to Taiwan’s Central News Agency. Some Taiwanese moviegoers have since taken to Facebook to express excitement about seeing their flag on Maverick’s jacket on the big screen.

The movie hasn’t secured a release date in China, and the Chinese regime’s censors are likely to block the film from reaching theaters over the inclusion of the Taiwanese flag. The CCP sees Taiwan as a part of its territory and rejects anything that might suggest the island is a de facto nation-state.

Chris Fenton, a long-time Hollywood executive and film producer, recently said on Twitter that the decision by the “Top Gun” sequel to restore the flags was an encouraging sign.

In a separate tweet, Fenton declared that Hollywood is “fighting back,” pointing to the “Top Gun 2” decision as well as Marvel’s decision to include “a newsrack belonging [to] The Epoch Times” in the recent “Doctor Strange” sequel.

In “Doctor Strange in the Multiverse of Madness,” a yellow newspaper box sits in the background during a fight scene when the titular character takes on a monster called Gargantos on the streets of New York. The boxes, which display the Chinese characters 大紀元時報, are for distributing copies of the Chinese-language edition of The Epoch Times.

Fenton previously told the publication that he believed the new “Doctor Strange” film would face censorship in China. The Marvel movie hasn’t yet secured a release date in China.

“This recent development of The Epoch Times being seen as one of the major stars in the movie is definitely throwing a wrench in any sort of shot that they did have of getting into that market,” Fenton said.

The English- and Chinese-language websites of The Epoch Times—known for their uncensored coverage of current affairs in China—are censored in China.

Taiwan’s de facto embassy in the United States, the Taipei Economic and Cultural Representative Office, was also excited to see the return of the Taiwanese flag in “Top Gun 2.”

“At last, somewhere along the line Hollywood did the right thing!” the office wrote on Twitter.

The fact that Beijing didn’t demand that the flags to be removed could have been related to Tencent’s decision to sever ties with the Paramount Pictures production. According to The Wall Street Journal, Tencent withdrew from the production due to concerns that Beijing might be angry about the tech giant’s affiliation with a film celebrating the U.S. military, citing unnamed sources.

Ian Easton, senior director at Virginia-based think tank Project 2049 Institute, wrote on Twitter that it was “great news” that “Top Gun 2” had cut ties with Beijing, citing the Journal’s report.

“After a brush with anti-American censorship, Top Gun 2 shed its ties to China’s government and won its soul back,” he wrote. “How many other American movies have sacrificed their values and principles at the [altar] of Chinese investment?”