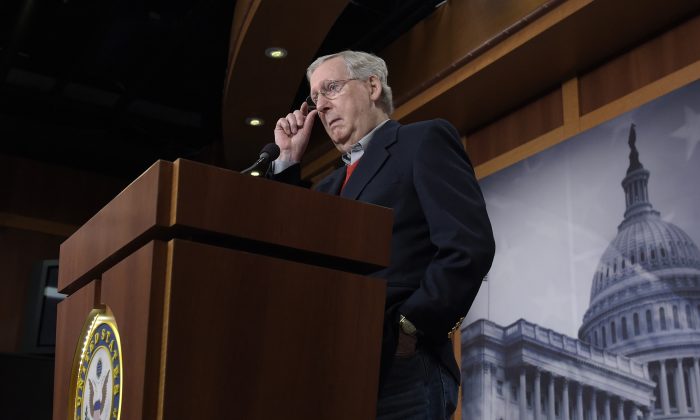 NEW YORK—The top Senate Republican said Monday that Congress will investigate a CIA assessment that Russia interfered in the November election on behalf of Donald Trump, an intelligence conclusion that the incoming commander in chief has called “ridiculous.”

Majority Leader Mitch McConnell told reporters that an inquiry would be conducted by the Senate intelligence panel. Two key Senate Republicans—John McCain of Arizona and Lindsey Graham of South Carolina, a leading Trump critic—have joined with two Democrats in seeking a bipartisan investigation into the Kremlin’s activities during the election.

After McConnell spoke, House Speaker Paul Ryan released a written statement saying a House Intelligence Committee probe of cyber threats by other countries and terrorist groups “will continue and has my support.”

Unlike Trump, who has expressed admiration for Putin, McConnell said flatly, “The Russians are not our friends.”

“Obviously any foreign breach of our cybersecurity measures is disturbing, and I strongly condemn any such efforts,” McConnell said.

Asked about McConnell’s support for a congressional probe, Trump spokesman Jason Miller said the focus on Russian interference in the election is “an attempt to delegitimize President-elect Trump’s win.”

The CIA recently concluded with “high confidence” that Russia sought to influence the U.S. election on behalf of Trump, raising red flags among lawmakers concerned about the sanctity of the U.S. voting system and potentially straining relations at the start of Trump’s administration.

Trump said Sunday the recent CIA assertion that Russian hacking had sought to help his candidacy was “ridiculous,” and he praised ExxonMobil CEO Rex Tillerson, who has emerged as the leading contender to lead the State Department.

“It’s a matter of concern to me that he has such a close personal relationship with Vladimir Putin,” McCain said of Tillerson. “And obviously they’ve done enormous deals together.” In an interview with CBS’ “Face the Nation,” McCain said, “That would color his approach to Vladimir Putin and the Russian threat.”

Sen. Chuck Schumer of New York, the incoming Democratic leader, on Monday welcomed McConnell’s endorsement of an inquiry, which he said must be bipartisan and encompass “all of the relevant intelligence.”

“This issue should not and must not turn into a political football,” Schumer said.

Meanwhile, Trump’s transition team announced Monday that Gen. John Kelly is to head the Department of Homeland Security. Kelly is a former commander of U.S. Southern Command with “unique insight into some of the challenges the United States faces at its southern border,” the announcement said.

During his campaign, Trump weathered turbulent relations with fellow Republicans but has since forged a more united front with GOP lawmakers since his November victory over Hillary Clinton.

In a wide-ranging interview with “Fox News Sunday,” Trump dismissed those concerns as little more than partisan griping. “I think the Democrats are putting it out because they suffered one of the greatest defeats in the history of politics in this country. And frankly, I think they’re putting it out. And it’s ridiculous,” Trump said.

The incoming president said he did not necessarily oppose calls from President Barack Obama for an inquiry into the 2016 campaign hacking but said it should not be solely focused on a single culprit.

“If you’re gonna to do that, I think you should not just say ‘Russia.’ You should say other countries also, and maybe other individuals,” he said. The White House has said the probe would focus on any breaches by other countries along with hacking committed in previous elections.

Trump’s decision-making on whom to select for secretary of state has stretched out over several weeks. He has been considering former Massachusetts Gov. Mitt Romney, a previously vocal Trump critic, Sen. Bob Corker of Tennessee, who leads the Foreign Relations Committee, and Tillerson, the oil industry executive who met twice with Trump during the past week.

In the television interview, Trump pointed to Tillerson’s deep relations with Moscow as a selling point. As ExxonMobil’s head, he maintained close ties with Russia and was awarded by Putin with the Order of Friendship in 2013, an honor for a foreign citizen.

Democrats have warned that plucking Tillerson for State would put the leader of the world’s largest oil company in a pivotal role on issues like climate change and the future of the Keystone XL pipeline. They also question whether he would apply diplomatic pressure on Russia’s conflict with Ukraine.

The prospect of Tillerson also received a cool reception from some GOP members of the Senate Foreign Relations Committee, which would consider his nomination.