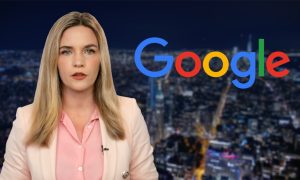 The Google logo is pictured in Paris on May 25, 2018. (Reuters/Charles Platiau)
Politics

Google users who searched for various terms related to the recent mass shootings in El Paso, Texas, and Dayton, Ohio, saw virtually no right-leaning news sources in the three “Top Stories” results that Google shows as the top results for news-related queries, according to a study by AllSides.com.

AllSides, which attempts to provide balanced perspectives by mixing sources biased left, right, and center, searched words such as “Shooting,” “El Paso,” “Dayton,” and “Guns” multiple times on three days between Aug. 5 and Aug. 7 in the aftermath of the shootings.

Of all the “Top Stories” results, 70 percent were from sources on the left, while about 18 percent were from sources AllSides considers to have center bias. Some of those, such as NPR, USA Today, and The Associated Press, have been characterized by others as left-leaning, including in the subjective chart created by investigative journalist and TV host Sharyl Attkisson.

The study noted that a quarter of all the results came from a single source—CNN. Second was The New York Times with 14 percent. Third was The Washington Post at 7 percent.

The search for “Trump” was skewed the least, showing around 57 percent of sources biased to the left, around 35 percent to the right, and the rest in the center.

AllSides acknowledged that the study used a small sample size, but noted that it “tracks closely with prior data on Google bias,” including its own report on Google News bias from last year (pdf) and the data put forward by researchers from the Northwestern University.

AllSides said the results of its study don’t mean that Google is “suppressing voices from the right” in relation to the shootings intentionally.

“It may be that a lack of right-leaning news media overall accounts for the huge difference between left and right-leaning appearances in Google News, or is perhaps an unintended consequence of Google’s algorithm,” it said.

Google has denied infusing political bias in its products but acknowledged that Google News gives preference to news sources the company deems “credible.”

The company’s workforce skews heavily left, with more than 90 percent of their political donations between 2004 and 2018 going to Democrats, according to data collected by Business Insider and political data firm GovPredict. It showed a similar situation at other tech companies, including Facebook, Apple, and Amazon.

Intentional or not, the evidence that tech companies favor left-leaning politics in their products has been growing for years. Internal documents, interviews with insiders, and hidden camera footage have shown that Facebook, Google, Twitter, and Pinterest suppress content using vague, sometimes secret criteria that reflect the political preferences of the companies.

Robert Epstein, a psychologist who has spent years researching Google’s influence on its users, has published research showing that just by deciding the sequence of top search results, the company can sway undecided voters.

This led to 2.6 million votes shifting in the 2016 presidential election to Trump’s opponent, former Secretary of State Hillary Clinton, Epstein determined. He warned that in 2020, if companies such as Google and Facebook all support the same candidate, they will be able to shift 15 million votes—well beyond the margin most presidents have won by.

Trump has reportedly been working on an executive order to address politically biased censorship by social media companies.