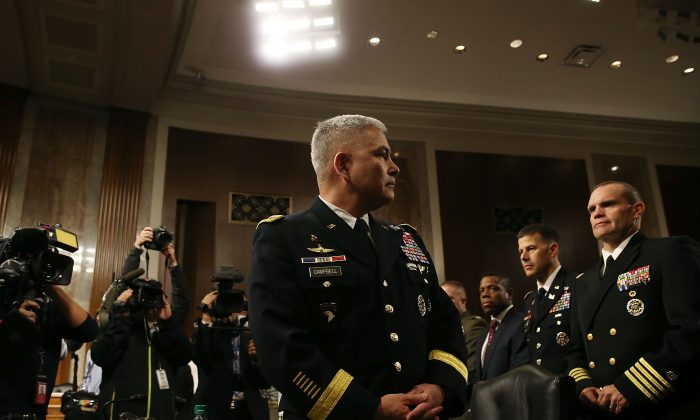 Top General Says US Strike on Afghan Hospital Was a Mistake

WASHINGTON—The deadly American attack on a hospital in northern Afghanistan occurred despite “rigorous” U.S. military procedures designed to avoid such mistakes, the top commander of U.S. and allied forces in Afghanistan said Tuesday.

Gen. John F. Campbell also told a Senate committee that he thinks President Barack Obama should revise the current plan to reduce the U.S. force in Afghanistan at the end of 2016. The plan calls for cutting the force from 9,800 to about 1,000 embassy-based security.

Campbell said he had provided his superiors with several options because conditions in Afghanistan have changed significantly since Obama approved that troop-cut plan in 2014.

Testifying three days after the medical clinic strike that killed at least 22 people, Campbell said Afghan forces requested air support Saturday while engaged in combat with Taliban fighters in the city of Kunduz, communicating with U.S. special operations troops at the scene.

Those U.S. forces were in contact with the AC-130 gunship that fired on the medical clinic run by Doctors Without Borders, he added.

“To be clear, the decision to provide (airstrikes) was a U.S. decision, made within the U.S. chain of command,” Campbell said. “The hospital was mistakenly struck. We would never intentionally target a protected medical facility.”

In his appearance before the Senate Armed Services Committee, Campbell said he could not provide more details about what happened, including who may have failed to follow procedures for avoiding attacks on hospitals. He said he must await the outcome of multiple investigations. Campbell had disclosed on Monday that the attack had been requested by Afghan troops.

Anti-war protesters sat in the front row of Tuesday’s hearing with red coloring, depicting blood, on their faces. They carried signs that read “Healthcare not warfare,” and “Kunduz victims: RIP.” A woman who shouted “Bombing hospitals is a war crime! Stop the bombing now!” was escorted from the room. The chairman, Sen. John McCain (R-Ariz.), warned that those interfering with the hearing risked arrest.

On troop levels, Campbell said the ability to train Afghan forces and conduct counterterrorism operations would be restricted if the number of U.S. troops were to drop to 1,000 by the end of next year.

“If you go to just embassy only, our ability to do TAA (train, advise, and assist) is very limited. Our ability to do CT (counterterror operations) is much more limited,” Campbell said. He said the different options that he has provided to his superiors are for troop levels beyond a normal embassy presence.

Asked if he thought the president should review his plan, Campbell said “Yes, sir.”

Defense Secretary Ash Carter said Monday that the Pentagon is providing options to the White House and Obama will be making decisions about future force levels later this fall.

Campbell has said the airstrike, now under investigation, was requested by Afghan forces who reported being under Taliban fire. It’s unclear whether the clinic was targeted in error or whether U.S. military personnel followed procedure. They are required to verify that the target of a requested airstrike is valid before firing.

Christopher Stokes, general director of Doctors Without Borders, has said “there can be no justification for this horrible attack” and that it was critical to conduct “a full transparent independent investigation.”

Kunduz has been the scene of heavy fighting in recent days.

A Taliban assault on Kunduz took Afghan authorities by surprise and embarrassed President Ashraf Ghani’s administration. The Taliban, who attacked on multiple fronts, held the city for three days before a government counteroffensive began. Afghan forces have retaken Kunduz, an important city on the Tajikistan border, a hub for drug and gun smuggling to and from Central Asian countries.