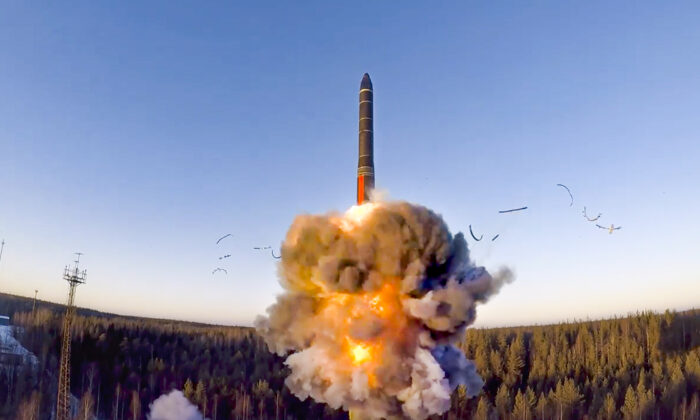 Ukraine’s top military general warned that Russia could use nuclear weapons if it becomes desperate and said a “limited nuclear conflict” cannot be ruled out.

Commander-in-Chief of the Armed Forces Gen. Valery Zaluzhny said that “there is a direct threat of the use, under certain circumstances, of tactical nuclear weapons by the Russian armed forces,” according to an opinion article that was published in state-run Ukrinform.

“It is also impossible to completely rule out the possibility of the direct involvement of the world’s leading countries in a ‘limited’ nuclear conflict, in which the prospect of World War III is already directly visible,” Zaluzhny said in the article, published Wednesday, as reported by The Washington Post.

The possibility of nuclear weapons being used was raised in late February, coming days after the start of the Ukraine-Russia conflict, when Russian President Vladimir Putin ordered his military’s nuclear readiness forces to be placed on high alert.

Since then, officials around the world have signaled that more nuclear preparedness is needed. For example, Sen. Mitt Romney (R-Utah) in May called on NATO to prepare for a possible Russian nuclear strike, while U.N. Secretary-General Antonio Guterres warned in early August that the world is one step away from “nuclear annihilation.”

In mid-August, Russian Minister of Defense Sergei Shoigu said Moscow has “no need” to use nuclear weapons in Ukraine

“From a military point of view, there is no need to use nuclear weapons in Ukraine to achieve the set goals. The main purpose of Russian nuclear weapons is to deter a nuclear attack,” he said during a speech in Moscow.

While criticizing media “speculation” regarding the “alleged use of Russian tactical nuclear weapons” or chemical weapons, Shoigu described the nuclear reports and claims as “informational attacks” and “lies.”

Two weeks before that speech, on Aug. 2, Putin remarked that a “nuclear war cannot be won and must never be fought” while addressing the Nuclear Nonproliferation Treaty.

But on Wednesday, Zaluzhny—the Ukrainian general—wrote that Russia’s capture of the Zaporizhzhia nuclear power plant in southeastern Ukraine suggests Moscow has a disregard for nuclear safeguards

After being driven back from Ukraine’s capital, Kyiv, during the start of the conflict, Russia has focused on taking Ukrainian areas around the south and east—from the eastern Donbas region to the southern Crimean Peninsula. Ukraine, at the same, has recently launched a counteroffensive in Kherson and Kharkiv, located near the Russian border.

“As long as the current situation persists,” Zaluzhny wrote, “this war can last for years.”

Since the start of the conflict, the United States has doled out well over $50 billion in aid to Ukraine, including around $10 billion in military assistance. Secretary of State Antony Blinken visited the country this week and pledged another $2.8 billion in additional military aid, according to the State Department.