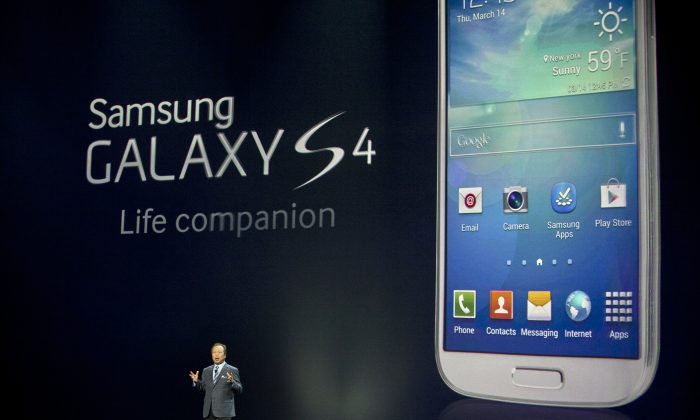 JK Shin, President and Head of IT and mobile communication division of Samsung introduces the Samsung Galaxy S-4, March 14 in New York City. The Galaxy S-4 has an radiation exposure level of 0.45 watts per kilogram, less than one half that of the Apple IPhone 5. (Allison Joyce/Getty Images)
Tech

Radiofrequency (RF) Electromagnetic field is the official name for those invisible cellphone waves that more and more consumers are concerned about.

They are the reason cellphone manufactures warn us not to carry our cellphones near our bodies, and recommend using wireless headsets.

These warnings and recommendations appear  in tiny print somewhere in our unopened cellphone user manuals.  They often go unread and unheeded.

While doctors and scientists remain divided as to the long term effects of RF exposure, many concerned consumers are attempting to limit exposure by using a headset or by purchasing devices with lower SAR numbers.

RF exposure varies depending on the cellphone in question.  The brand, model, carrier, and even the signal strength can affect how much RF you are exposed to. Exposure difference between different models is measured by the Specific Absorption Rate (SAR).

The Federal Communication Commission‘s (FCC) releases data on the SAR of every cellphone model available in U.S. markets. These numbers are in your user manual too and are also available on the FCC website.

The legal limit for RF exposure is SAR 1.6 watts per kilogram in the United States and Canada, and SAR 2 in Europe.

The Top Five Best and Worst Cellphones for RF exposure, as compiled by CNET in October 2012, are listed below.