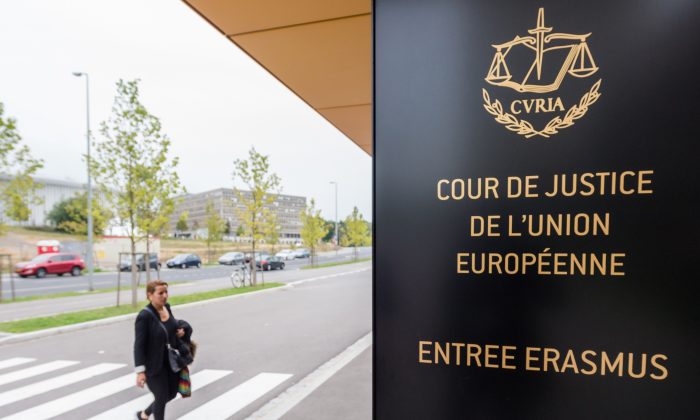 In this photo taken on Monday, Oct. 5, 2015 a woman walks by the entrance to the European Court of Justice in Luxembourg. Europe's highest court has ruled in favor of an Austrian law student who claims a trans-Atlantic data protection agreement doesn't adequately protect consumers. (Geert Vanden Wijngaert)
Europe

LUXEMBOURG—The European Union’s highest court ruled Tuesday that an agreement that allows companies to freely transfer data to the U.S. is invalid as it does not adequately protect consumers.

The verdict could have far-reaching implications for companies operating in Europe. It does not ban the transfer of data but will allow national authorities to review what kinds of information companies want to send to the U.S., possibly complicating business.

Schrems complained to the data protection commissioner in Ireland, where Facebook has its European headquarters, that U.S. law doesn’t offer sufficient protection against surveillance of data transferred by the social media company to servers in the United States.

Irish authorities initially rejected his complaint, pointing to a 2000 decision by the EU’s executive Commission that, under the so-called “safe harbor” agreement, the U.S. ensures adequate data protection.

The agreement has allowed for the free transfer of information by companies from the EU to U.S. It has been seen as a boost to trade since, absent such a deal, swift and smooth data exchange over the Internet would be much more difficult.

On Tuesday, the European Court of Justice ruled that the data sharing pact is invalid. It said that the “safe harbor” deal enables interference by U.S. authorities with fundamental rights and contains no reference either to U.S. rules to limit any such interference or to effective legal protection against it.

The court said the effect of the ruling is that the Irish data commissioner will now be required to examine Schrems’ complaint “with all due diligence.”

Once it has concluded its investigation, the authority must “decide whether … transfer of the data of Facebook’s European subscribers to the United States should be suspended on the ground that that country does not afford an adequate level of protection of personal data,” the court said in a summary of its ruling.

Jobs Report Could Signal Whether US Economy Is Strengthening

Schrems said he hoped the ruling will be a milestone for online privacy.

“This decision is a major blow for U.S. global surveillance that heavily relies on private partners,” Schrems said in a statement. “The judgement makes it clear that U.S. businesses cannot simply aid U.S. espionage efforts in violation of European fundamental rights.”

However, he noted that the ruling doesn’t bar data transfers from the EU to the U.S., but rather allows national data protection authorities to review individual transfers.

“Despite some alarmist comments I don’t think that we will see major disruptions in practice,” Schrems said.

Sophie In’t Veld, a leading Liberal lawmaker in the European Parliament, welcomed the ruling and called the “safe harbor” decision “a travesty of legality.”

“We need clear rules to govern the transfer of personal data to the U.S. and other non-EU countries,” she said. “But they must be legally watertight, provide real and meaningful protection, and there must be proper enforcement.”