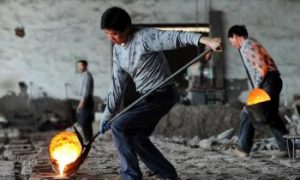 Chinese Steel Plants in the U.S., Comes with Controversy
0
Business

[xtypo_dropcap]T[/xtypo_dropcap]he International Labor Organization (ILO) published its second Global Wage Report, a statistical analysis of global salaries and a comparison how each country ranks against the rest of the world in various pay categories.

The report analyzed 115 countries, and compared how real wages have been affected during the economic crisis over the past two years. Real wage, as opposed to nominal wage, is adjusted to inflation, therefore providing a clearer representation of a person’s salary.

The report also examined 30 countries with available data between the periods 1995-2000 and 2007-2009, and determined that the gap between the top 10 percent best paid workers and the bottom 10 percent of workers has increased in 17 out of 30 countries.

“The largest part of this increase in inequality was due to top earners flying away from the majority, another part was due to the so-called ‘collapsing bottom,’ where the distance between median workers and low-paid workers has increased in 12 out of 28 countries,” said the report.

The report concludes that low-wage workers are not just earning less money, but are also prone to instability in their earnings and are the most vulnerable in economic downturns.

“In the case of advanced countries, such as European Union (EU) members, the risk of being unemployed or inactive is sometimes two or three times higher among low-wage workers than higher wage workers. … This means that these workers suffer more than others from the effects of sudden economic downturns. … Therefore, one important test for the effectiveness of countercrisis policy measures is how successfully low-wage workers are able to cope with the recession,” states the report.

From the 1995-2000 period to the 2007-2009 period, Germany also saw an increase of 4 percent in the number of its low-wage workers, compounding to a total of 21 percent of all its full-time workers being low-paid.