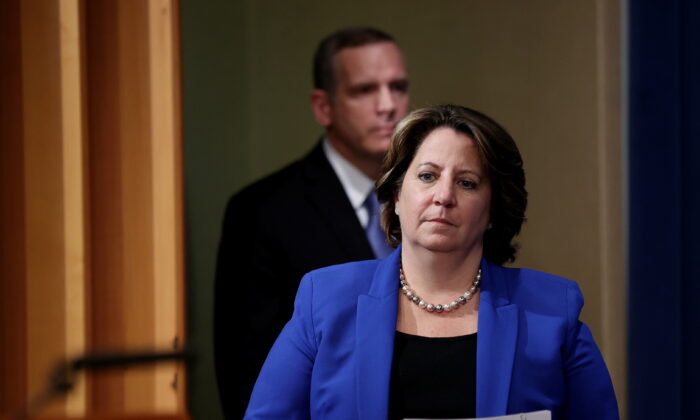 Deputy Attorney General Lisa Monaco is followed by FBI Deputy Director Paul Abbate as she arrives to speak about the Colonial Pipeline ransomware attacks during a news conference at the Justice Department in Washington on June 7, 2021. (Jonathan Ernst/Pool/Reuters)
Executive Branch

The Department of Justice (DOJ) Deputy Attorney General Lisa Monaco defended a new directive by U.S. Attorney General Merrick Garland to stop a rise in what school officials call “threats and harassment” by parents who have been attending public school board meetings.

“I want to be very clear in the memorandum that’s publicly available, the Attorney General issued talks about the importance of bringing federal, state, local law enforcement together to make sure that there is awareness of how to report threats that may occur, and to ensure that there’s an open line of communication to address threats, to address violence, and to address law enforcement issues in that context, which is the job of the Justice Department, nothing more,” Monaco said at a Senate Judiciary Committee hearing Tuesday.

In 2021, there has been a rise in parents attending school board meetings and voicing their concerns about their child’s school curriculum and in many videos, parents are seen vehemently opposing the teaching of critical race theory and school mask mandates.

Sen. Tom Cotton (R-Ark.) asked Monaco about Garland’s recent memorandum which seeks to investigate any threats of violence, intimidation, and harassment by parents toward school personnel.

In the document, the AG directs the FBI and U.S. attorneys to convene meetings with federal, state, and local leaders within 30 days to “facilitate the discussion of strategies for addressing threats against school administrators, board members, teachers, and staff,” according to a letter (pdf) the attorney general sent on Monday to all U.S. attorneys, the FBI director, the director of the Executive Office of U.S. Attorneys, and the assistant attorney general of the DOJ’s criminal division.

Merrick’s letter comes only days after a national association of school boards (NSBA) asked the Biden administration to take “extraordinary measures” to prevent alleged threats against school staff that the association said were coming from parents who oppose mask mandates and the teaching of critical race theory.

“Is it domestic extremism for a parent to advocate for their child’s best interests?” Cotton asked the Deputy AG.

“I think what you have described no I would not describe as domestic extremism,” replied Monaco.

Cotton linked the NSBA letter as a possible motivation for issuing the DOJ memorandum.

“It’s a fact that the school board association just sent this letter to President Biden and then conveniently the Attorney General released his letter yesterday, describing his series of measures to confront this grave and the growing threat of parents protesting their kids being indoctrinated and the school board having to call a recess. [Is there] a connection between those two things?” asked Cotton.

When questioned by Sen. Josh Hawley (R-Mo.) on the legitimacy of the new directive, Monaco again defended Merrick, saying “spirited debate” is welcome at board meetings but added that “the Attorney General’s memorandum made quite clear that violence is not appropriate.”

Hawley implied that the DOJ’s new directive could take away parents’ rights because the document does not make clear what is encompassed by the terms “harassment or intimidation.”

“I don’t think so, Miss Monaco. With all due respect, it didn’t make it quite clear, it doesn’t define those terms, nor does it define harassment or intimidation. It talks about violence, I think we can agree that violence shouldn’t be condoned or looked aside from in any way, swept under the rug at all. But harassment and intimidation. What do those terms mean in the context of a local school board meeting?” asked Hawley.

The DOJ did not immediately return a request to comment.