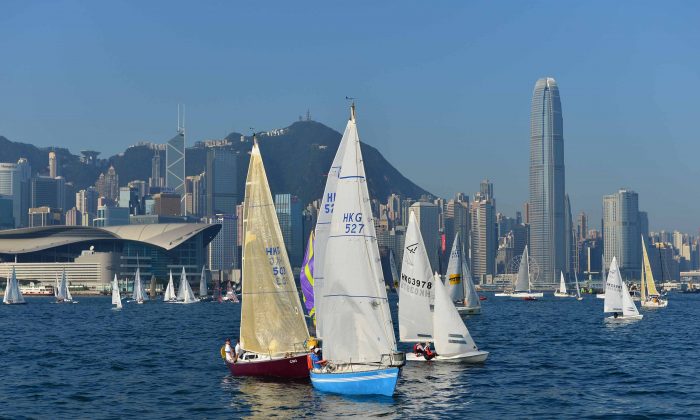 Ruffian and 420 boats setting sail from Victoria Harbour in the 2014 RHKYC Around the Island Race on Sunday Nov. 16, 2014. (Bill Cox/Epoch Times)
HK Sports

HONG KONG—After exciting races in the Lipton Trophy which took place in Victoria Harbour on Saturday Nov. 15, 2014, the second race of the Royal Hong Kong Yacht Club’s ‘Top Dog Series’ the Around the Island Race was greeted on Sunday Nov 16 with not even a breath of air.

This pursuit race, the biggest on the Hong Kong yachting calendar had start times from 8.30am until 10am with the slower boats starting ahead of the faster boats, but such were the conditions that it was difficult to see which boats had started and which were waiting for the gun. Boats slowly edged eastwards, but it was not until nearly 10.30am that the breeze started to blow.

It was fantastic to see more than 200 boats heading for Lei Yue Mun Gap and the open sea. By the time the boats reached Cape D’Aguilar there was quite a swell and turning downwind the spinnakers were hoisted producing quite a sight. But after rounding the headland at Stanley the wind dropped off again and Race Officer Inge Strompf-Jepsen decided to shorten the course off Ap Lei Chau, to the south of the Island.

The first four Big Boats on corrected time were “Ambush”, followed by “Mojito”, “Stella” and “Electra”.

Next Races
The Hebe Have Winter Saturday Series continues this Saturday Nov. 20, 2014.