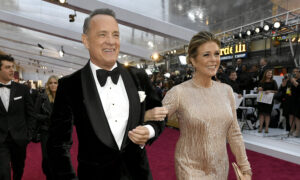 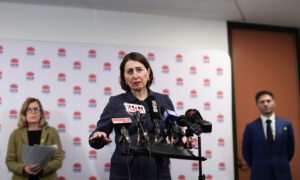 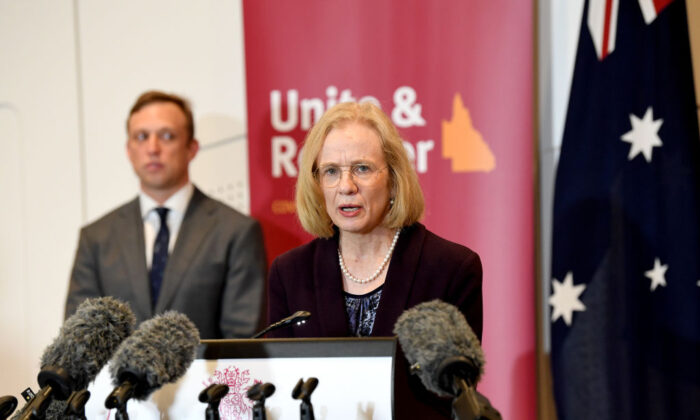 Top Doctors Tell Critics ‘Back Off’ QLD Over Border Control

Queensland’s top doctors have called for critics of the state’s chief health officer to “back off” over COVID-19 border closures.

Chief Health Officer Jeanette Young has been repeatedly targeted for advising that the state should remain isolated from Victoria, New South Wales, and the ACT.

“We’re an evidence-based organisation and we follow what the chief health officer says,” Perry said at a press conference on Sept. 13.

“What the chief health officer in Queensland says goes—it’s the law.”

Perry said there had been many “stressful” personal attacks on Young over her health advice to the government.

He said the criticism had mostly been by online trolls but he acknowledged the federal government also had a “different point of view.”

“Back off. Leave her alone. We think this chief health officer is doing a great job,” he said.

Meanwhile, Deputy Premier Steven Miles responded to reports that top businesses, including Qantas, were uniting to launch a campaign against the state’s tough border stance.

“Chief executives obviously have a right to further the economic interests of the companies,” he said.

“(But) if the boss of Qantas wanted to do more and show compassion for Australians, then he wouldn’t be gouging them tens of thousands of dollars just to come home.”

Qantas referred AAP to previous statements saying the airline had not operated international commercial flights since June and repatriation flights were sponsored by the federal government.

There were no new coronavirus cases in the state overnight, with 30 remaining active.

Perry said the AMAQ remained concerned about another coronavirus wave.

“Victoria is a very stark demonstration about what can happen if we lower our sights too quickly,” he said.

He said the health group supports Young’s scientific decisions during the COVID-19 crisis.

“We’re an evidence-based organisation and we follow what the chief health officer says,” he said.

“What the chief health officer in Queensland says goes, it’s the law.”

Perry said the chief health officer’s decisions over exemptions to cross the state’s border or quarantining rules had been fair.

“It hasn’t just been footballers and wealthy people,” he said.

Opposition leader Deb Frecklington disagreed, saying the government had been inconsistent over borders.

‘Labor are trying to distract from the unfair double-standards that Queenslanders keep seeing on exemptions,” she said.

‘We can’t have one rule for AFL stars and celebrities and another rule for ordinary Queenslanders whose families are being torn apart,” she said, referring to Sarah Caislip whose appeal to attend her father Bernard’s funeral on Thursday was denied.