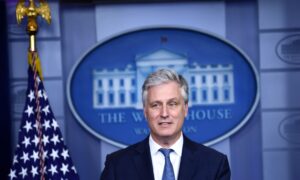 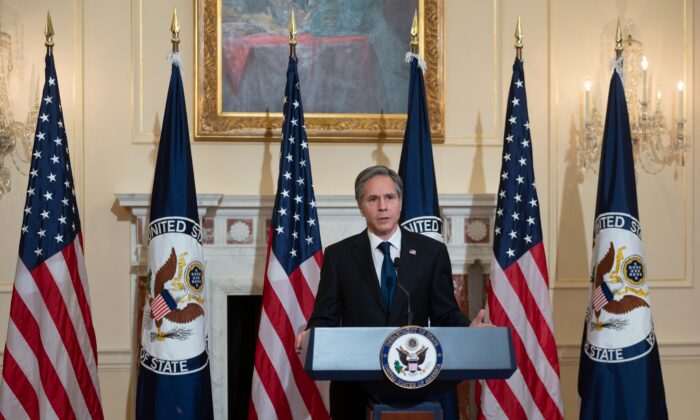 U.S. Secretary of State Antony Blinken delivers remarks about priorities for the administration of U.S. President Joe Biden in the Ben Franklin room at the State Department in Washington, on March 3, 2021. (Andrew Caballero-Reynolds/POOL/AFP via Getty Images)
Executive Branch

Top Defense and State Dept. Officials Will Travel to Japan and Korea

Secretary of Defense Lloyd J. Austin and Secretary of State Antony J. Blinken will meet with officials in Japan and South Korea in March in an effort to advance the Biden administration’s Indo-pacific strategy, against the backdrop of an increasingly hostile China.

Austin will join Blinken on March 16–17, in Japan for the U.S./Japan Security Consultative Committee hosted by Japan’s Minister for Foreign Affairs Toshimitsu Motegi and Minister of Defense Nobuo Kishi, to strengthen the two countries’ cooperation in an effort to keep “peace and security in a free and open Indo-Pacific in the face of long-term competition with China.”

On March 17–18, Austin and Blinken will attend a U.S./South Korean Foreign and Defense Ministerial hosted by Korea’s Foreign Minister Chung Eui-Yong and Minister of Defense Suh Wook, to discuss security in the region and how the U.S.-Korean “alliance remains a linchpin of peace, security, and prosperity in Northeast Asia, a free and open Indo-Pacific, and around the world.”

In addition, Austin will meet with India’s Defense Minister Rajnath Singh, to discuss U.S./India Defense and how cooperation between the two countries can advance an “open Indo-Pacific and Western Indian Ocean Region.”

As part of the Biden administration’s focus on the Indo-pacific region, President Joe Biden will join a (“Quad”) meeting on Friday, March 12 with the leaders of Japan, India, and Australia in an effort to increase cooperation with U.S. allies in the region.

The alliance was established in 2007 and has met periodically but this will be the first virtual gathering of all four leaders.

White House spokeswoman Jen Psaki said the meeting of the “Quad” countries showed the importance placed by Biden on U.S. allies and partners in the Indo-Pacific region.

A range of issues facing the global community was expected to be discussed “from the threat of COVID to economic cooperation and, of course, to the climate crisis,” she said.

The United States is looking to strengthen ties with key allies and partners as China adopts an increasingly assertive foreign policy in Asia and elsewhere.

After President Biden’s Feb. 8 call with Prime Minister Narendra Modi of India, the White House said, “the leaders agreed to continue close cooperation to promote a free and open Indo-Pacific, including support for freedom of navigation, territorial integrity, and a stronger regional architecture through the “Quad” (Quadrilateral Security Dialogue).