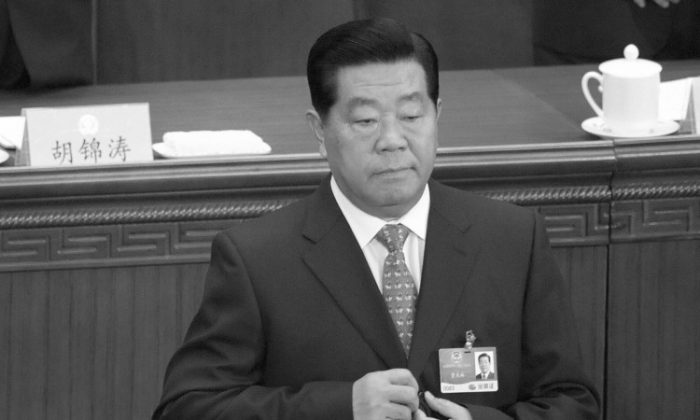 Jia Qinglin in the Great Hall of the People in Beijing on March 3, 2009. (Liu Jin/AFP/Getty Images)
China

Jia Qinglin, a senior member of the Politburo Standing Committee of the Chinese Communist Party (CCP), traveled to Hebei Province to “conduct research,” according to a state-run media report last month. However, an inside source in Beijing told The Epoch Times that the true purpose of Jia’s trip was to secretly investigate 300 villagers who had signed a petition demanding the release of an imprisoned Falun Gong practitioner.

In February, Wang Xiaodong was arrested at his home in Zhouguantun Village of Botou City, Hebei Province. His younger sister Wang Xiaomei gathered signatures and thumbprints from 300 village household representatives in a petition demanding that Wang be released by the authorities. The document was certified with an official stamp from the head of the village’s Party committee. The incident has since been dubbed the “Brave 300 case.”

When it was circulated within the Politburo, the petition alarmed the top Party leadership, because it demonstrates solidarity and resistance against the communist regime’s ongoing persecution of the spiritual practice of Falun Gong.

State media reported that Jia would be in Hebei Province from July 12 to 18, visiting his hometown of Botou City on July 15. The source said that Jia was actually sent to Hebei Province to investigate the “Brave 300” village and understand how the Chinese public views Falun Gong.

The insider also noted that the Cangzhou and Botou authorities had not reported details of the “Brave 300” case to the Hebei Province authorities, which in turn had failed to report the specifics of Wang’s arrest to central authorities. Cangzhou is the prefecture-level city of which Botou is a part.

Since Jia’s visit, Botou City police chief Yang Jianjun has been transferred to a police chief position in another county. According to the insider, personnel changes have already been made at the Botou City Public Security Bureau.

A phone call to the Botou City Public Security Bureau confirmed that Yang had indeed been replaced and transferred to Nanpi County.

In recent months, instances of local resistance to the authorities’ persecution of Falun Gong practitioners have sprung up throughout the country. In May, 15,000 residents of Heilongjiang Province signed a petition demanding an investigation into the death of a practitioner and calling for the release of two other family members who are imprisoned.