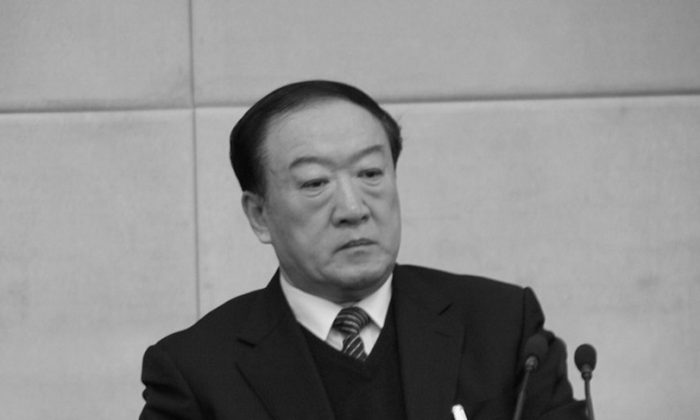 Su Rong, the vice-Chairman of the Chinese People's Political Consultative Conference, is being investigated for “serious violations of discipline and law,” according to an announcement on June 14. (Screenshot/cnr.cn)
China

Chinese communist leader Xi Jinping’s campaign to purge the Party of political holdovers claimed its highest-ranking target still in office, with the announcement of the investigation of the vice-chairman of the Chinese Communist Party’s political advisory body on June 14.

Su Rong was second in charge of the Chinese People’s Political Consultative Conference, a political organ unique to the Chinese system originally designed to bring non-communist social groups under the Party’s control.

The Central Commission for Discipline Inspection, which carries out secret investigations of Party officials before handing them to prosecutors, announced merely that Su Rong was suspected of “serious violations of discipline and law.” Those are usually code words for corruption.

Xi Jinping, since soon after he took power in November 2012, has been systematically purging the Party of officials that belong to the old guard, in the name of a sweeping anti-corruption effort. Xi has also carried out a harsh crackdown on corruption among the rank-and-file cadre corps.

The most notable official purged until Su was Zhou Yongkang, the former head of the security forces appointed by Jiang Zemin. Zhou is reported to be under Party control. Zhou, along with the now imprisoned Bo Xilai, are understood to have led a conspiracy  plot to depose Xi.

Su Rong was also a longtime stalwart of Jiang Zemin, a former leader of the Chinese Communist Party who held formal power from 1989 to 2002, but maintained varying degrees of informal control until at least as late as the end of 2012. This extended influence was mediated through a network of officials, like Su Rong and Zhou Yongkang, who owed their careers to Jiang.

Su, 65, is the highest-ranking official in the national leadership to be purged since Xi Jinping took power.

Su’s downfall has come as a shock to the public, partly because of its suddenness.

His last public appearance was on June 10, just four days before the investigation was announced. Official media said he visited Qinghai Province, in the northwest of China, from June 8 to 10.

And in March of last year he was promoted to be the vice-chairman of the political consultative conference, a prestigious post even if it does not carry any direct control over the instruments of state.

But those attentive to the undercurrents of the Chinese Communist Party’s internal power struggles may have been able to predict that Su Rong was likely to encounter problems sooner or later.

Before his promotion last March, there were reports in the Chinese press saying that his wife was suspected of being involved in a number of shady land and construction deals. Reports of that nature are often a prelude to a coming purge.

Moreover, and most saliently, Su Rong himself had a long history with Jiang Zemin, the former communist leader. Jiang and his pet political campaign, the persecution of Falun Gong, are the common but unstated elements in many of the recent high-level purges in the Party.

Su played a leading role in the persecution of Falun Gong when he was a provincial-level official, and built close ties with then-Party leader Jiang Zemin, who started the persecution of the group in July 1999. Falun Gong is a traditional meditation practice based on the principles of truthfulness, compassion, forbearance. It gained around 70 million practitioners in China by 1998, according to official statistics of the time.

While Su was deputy secretary of the Party Committee in Jilin Province from 1999 to 2001, he was also the head of the 610 Office, according to the World Organization to Investigate the Persecution of Falun Gong, a research organization that scours official websites for incriminating information.

The job of the 610 Office is to coordinate efforts to persecute Falun Gong practitioners in Jilin Province, primarily by rounding them up and subjecting them to detention and physical and mental torture, all aimed at having them renounce their spiritual beliefs and pledge allegiance to the Communist Party.

Su was honored for his special role in the campaign with a tip of the hat by Party mouthpiece People’s Daily in October 1999.

Under Su’s leadership, at least 23 practitioners of Falun Gong are confirmed to have been killed in Jilin Province, according to the World Organization to Investigate the Persecution of Falun Gong, which carefully reconstructed his career path using public documents, matching up statements he made encouraging the campaign with violent actions taken by security forces against Falun Gong practitioners in custody.

For his efforts in Jilin Province, Su was promoted to be secretary of the Party Committee in northwestern China’s Gansu Province in October 2001. He quickly set to work, making high-profile appearances to demonstrate the correct political attitude toward Falun Gong—publishing articles attacking the practice in vicious terms in Communist Party ideological journals, visiting local public security offices to encourage their violence, and instructing courts and the procuratorates to step up their anti-Falun Gong work.

In October 2004, when he was visiting Zambia along with a group of other Party officials, Su Rong was served papers in a civil lawsuit for murder, torture, and defamation of Falun Dafa practitioners, according to a 2004 report in Minghui, a Falun Gong website.

Minghui reported that the High Court of Zambia issued an arrest warrant and dispatched police to search for Su, ordering him to remain in the country for a hearing on Nov. 8. But, it said, he fled the country through the Chirundu border with the assistance of the Chinese Consulate.

When Su returned to China he became the executive vice principal of the Central Party School in Beijing, the Communist Party’s main center for ideological indoctrination and cadre training, from 2006 to 2007. The school principal was at the time Zeng Qinghong, the former vice-president of China and a former member of Politburo Standing Committee, often called the “hatchet-man” of Jiang Zemin.

A year later, Su was promoted to be Party secretary of southeast China’s Jiangxi Province, likely on the recommendation of Zeng Qinghong, whose hometown is in Jiangxi, and who is known to wield strong influence there.

Zeng Qinghong is now under a form of internal control, which limits his movements and public appearance, Epoch Times reported recently, based on an extremely reliable source. Other associates of Jiang Zemin have also been purged.

Three senior Party officials in Jiangxi Province have been fired in the past year, including Chen Anzhong, former deputy director of the Standing Committee of the Provincial People’s Congress.

Now things have come full circle for Su Rong. Like other top Party officials who enthusiastically implemented the anti-Falun Gong campaign—including Li Dongsheng, the head of the extralegal 610 Office whose sole task was to persecute Falun Gong, and Zhou Yongkang, the former chief of the entire domestic security apparatus—Su Rong’s loyalties to a former leadership have become the source of his current predicament.

Political analysts said that it is highly unlikely that Xi Jinping’s purge of these men is aimed at vindicating Falun Gong. Rather, it is that they together formed a center of political power and influence that was held together through the campaign against the practice. They are being purged simply because they posed a threat to Xi Jinping’s authority, analysts said—and there are no signs that the Falun Gong persecution will abate as a result.