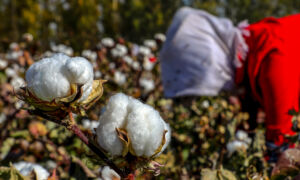 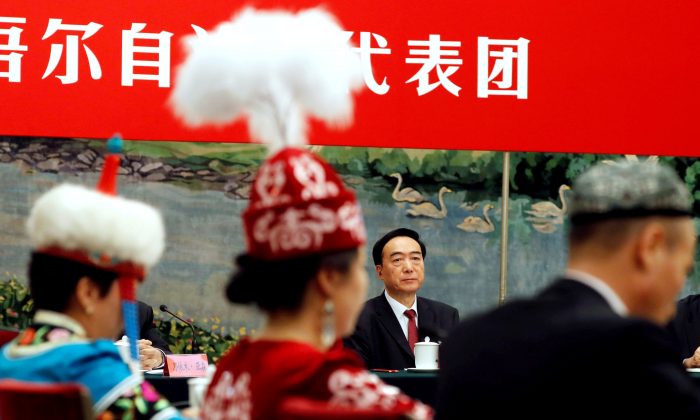 Xinjiang Uyghur Autonomous Region (XUAR) Party Secretary Chen Quanguo attends a group discussion session on the second day of the 19th National Congress of the Communist Party of China at the Great Hall of the People in Beijing on Oct. 19, 2017. (Tyrone Siu/Reuters)
China Human Rights

Xinjiang’s Communist Party secretary Chen Quanguo for the first time on April 2 openly responded to the campaign to boycott Xinjiang cotton, which had been gaining traction among big corporations.

Last year, the United States imposed sanctions on four Chinese officials over serious human rights abuses in Xinjiang—a remote region in northwest China. As the top government official in the area, Chen was named at the top of the sanctions list.

“Some forces concocted and propagated a large number of lies and false information about Xinjiang to smear Xinjiang’s image,” Chen said, touting “Xinjiang’s story” as one of the most successful human rights stories in history.

He made the comments during a ceremony to receive a foreign delegation of diplomats from over 20 countries led by Secretary-General of the Shanghai Cooperation Organization (SCO) Vladimir Norov, the former foreign affairs minister for Uzbekistan. The group were in Xinjiang from March 30 to April 2.

Swedish fashion retailer H&M issued a statement in September last year, saying the company would stop sourcing cotton from Xinjiang as it was “deeply concerned” by reports of forced labor against “ethnoreligious minorities” in the region.

Six months later, the Communist Youth League of China issued an official statement on March 24 calling on Chinese people to boycott Western brands such as H&M, Nike, and Adidas because they had joined the campaign to boycott the use of Xinjiang cotton.

Since then, China’s Foreign Affairs Ministry and Commerce Ministry have both opposed Western sanctions and the Xinjiang cotton boycott, claiming that “external forces” were trying to defame China.

According to London-based organization Free Tibet, Chen, during his tenure as the party boss in Tibet between 2011 and 2016, gained rich experience in how to tighten the CCP’s grip on minority groups.

After he took office in Xinjiang in 2016, he implemented detention on a large scale, and quickly reproduced the iron-handed management model he implemented in Tibet in his new territory.