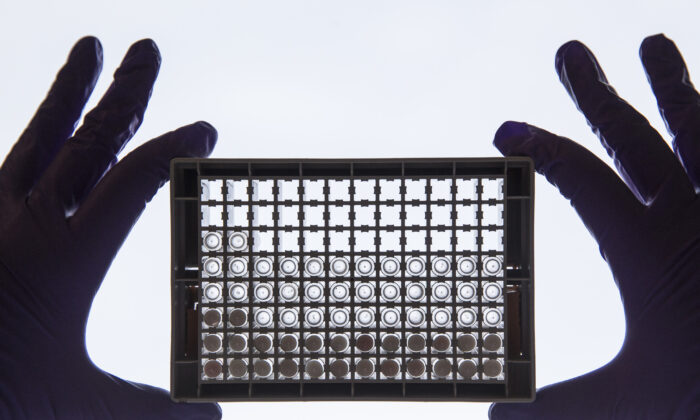 In this unrelated file image, a cancer researcher examines cells in a 96-well plate at a research facility in Cambridge, England, on Dec. 9, 2014. (Dan Kitwood/Getty Images/Cancer Research UK)
UK

One of Britain’s top cancer research institutes has backtracked from rescinding an offer to a Ph.D. candidate because she is Russian.

The matter came to light when a friend of the applicant posted a copy of the letter on Twitter.

“I have just been told that very recently the Beatson has established a new policy upon which I am unable to appoint you because you are Russian,” the letter said.

“I’m so deeply sorry for this. I find so [sic] unfair that what is going on in Russia affects very talented young scientists like you … I really hope that you can find a place to do your Ph.D.!”

The Beatson Institute, a cancer research facility in Glasgow, Scotland, funded by Cancer Research UK, claims to be an inclusive organisation.

On its website, it says, “Creating a diverse working culture where everyone can be themselves and reach their full potential as individuals is hugely important to us at the CRUK Beatson Institute.”

Owen Sansom, the Cancer Research UK Beatson Institute director, rejected the claim of discrimination saying it was an administrative error in a statement and offered the student a place.

“The Cancer Research UK Beatson Institute does not have a policy of declining applications from Russian students on the basis of their nationality.

“Applications are considered on a case-by-case basis and offers are always reviewed against external checks such as visa requirements or UK Government sanctions.

“In this case, there was an initial misunderstanding of these restrictions, which has been addressed. We have contacted the applicant involved to offer them a place and have apologised for any distress caused. We are reviewing our processes internally to prevent this issue from occurring again in future.”

Since the outbreak of the war in Ukraine, there have been a number of reported cases of unfair treatment of Russian students, academics, and sportsmen and women.

In May, the University of West London came under fire when they rejected the application of Elena Ledneva, a student who applied to do a hospitality course.

“I don’t see that banning [sic] from education can somehow help or stop what’s going on.”

In April, The Lawn Tennis Association banned Russians and Belarusians from competing at Wimbledon.

Top-ranked player Daniil Medvedev was unable to compete. Ironically, the eventual ladies champion at Wimbledon, Elena Rybakina, is Russian-born but has represented Kazakhstan since 2018.

The Lawn Tennis Association was eventually fined for its actions.

The Epoch Times reached out to the Beatson Institute and the University of West London for comment.