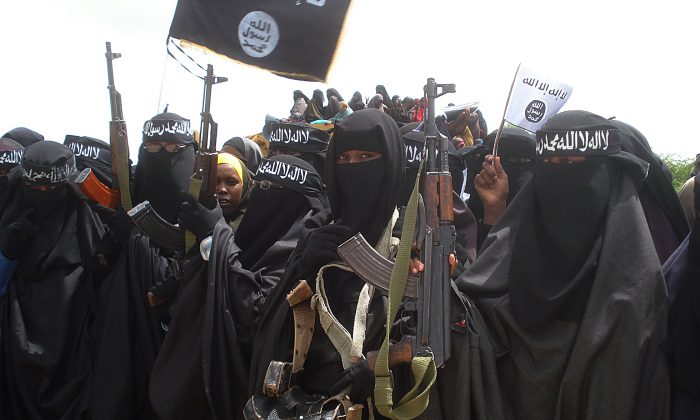 Somali women carry weapons during a demonstration organized by the Extremist group, Al-Shabaab, which is fighting the Somali government in Suqa Holaha neighborhood of Mogadishu on July 5, 2010. (ABDURASHID ABIKAR/AFP/File Photo via Getty Images)
Africa

NAIROBI, Kenya—A leader with the Islamic extremist group al-Shabab, who had a $3 million bounty on his head, surrendered in Somalia, a Somali intelligence official said Saturday.

Zakariya Ismail Ahmed Hersi surrendered to Somali police in the Gedo region, said the intelligence officer, who insisted on anonymity because he is not authorized to speak to the press.

Hersi may have surrendered because he fell out with those loyal to Ahmed Abdi Godane, al-Shabab’s top leader who was killed in a U.S. airstrike earlier this year, the officer said.

Hersi was one of eight top al-Shabab officials whom the Obama administration offered a total $33 million in rewards for information leading to their capture in 2012. Despite suffering major losses such as losing major cities, al-Shabab remains a threat in Somalia and the East African region. The group has carried out many terror attacks in Somalia and some in neighboring countries including Kenya, whose armies are part of the African Union troops bolstering Somalia’s weak U.N.- backed government.

On Christmas day al-Shabab launched an attack at the African Union base in Mogadishu. Nine people died, including three African Union soldiers, in the attack on the complex, which also houses U.N. offices and western embassies. Al-Shabab said the attack was aimed at a Christmas party and was in retaliation for the killing of the group’s leader Godane.

Al-Shabab also claimed that 14 soldiers were killed but the group often exaggerates the number of people it kills.

Al-Shabab is waging an Islamic insurgency against Somalia’s government that is attempting to rebuild the country after decades of conflict that was sparked off by the 1991 ouster of dictator Siad Barre.