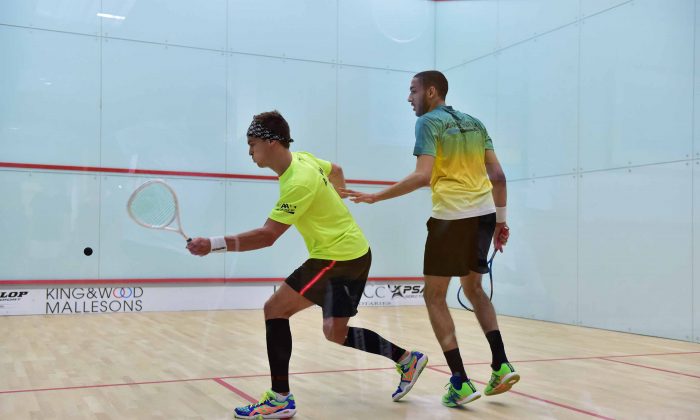 Laurens Jan Anjema (on strike) plays a forehand during his 1st round battle with Declan James in the HKFC Meco PSA 25 tournament at the Hong Kong Football Club on Wednesday May 27, 2015. (Bill Cox/Epoch Times)
HK Sports

HONG KONG—The HKFC/Meco International 25 PSA/WSA men’s and women’s tournaments are currently in progress at the Hong Kong Football Club with both competitions coming to a conclusion this Saturday May 30. Top 50 world ranked players from many countries including USA Australia, England, Wales, France, India, Egypt and Malaysia are all eager to take the top prize.

In the men’s draw Hong Kong’s own Max Lee (last year’s winner) and Alex Au (just back from winning the 18th Asian Individual Squash Championship in Kuwait) will be hoping to stop international opposition including Saurav Ghosal from India, Omar Abdel Meguid of Egypt, Laurens Jan Anjema from Netherlands (2013 finalist), and Nafiizwan Adnan of Malaysia. Other internationals include Tom Richards, Joe Lee and Jaymie Haycocks from England, Rex Hendrik from Australia and Harinder Pal Singh Sandhu from India.

Laurens Jan Anjema from The Hague, Netherlands spoke with Epoch Times earlier in the week. He reached a world top ranking of 9 in 2010 but slipped down to 16 by the end of 2014. After a period out for injury he is currently at 28 and climbing the rankings again. “I reached the final in 2013 but was beaten by Alister Walker. I have been back playing again for the last few months and have been busy.

“It’s one big struggle to come back”, he confided “I was out for 4-months and the other guys are getting better, when you are not playing you are only getting worse, so you are playing catch up”.

Anjema has not played on the new glass-surfaced courts at the HKFC until now but after a short practice he came off with a good impression.

“I think they are fantastic, to be honest just now was the first time I have played on them and I really like them. It feels like a proper glass court – glass absorbs a little bit more than concrete. It’s a really nice feeling”.

Asked about the tournament, he replied, “Yes, I am really looking forward to it, this is my last tournament of the season and I am keen to finish on a high”.

Anjema has played many people on the tour but has only played one of the players in this competition, recently.

“I am 32 years old now and have been on the tour for 14 years so I have played most of the players but not recently, apart from Omar Maguid, in Egypt but he is in the other half [of the draw], I haven’t played Saurav [Ghosal] recently, I haven’t played Leo Au recently so it will be interesting”.

Women’s Draw
In the women’s draw, which includes 12 of the world’s top 50 players, Hong Kong’s Annie Au and Joey Chan will have strong opposition from Rachael Grinham of Australia (last year’s finalist), Jenny Duncalf of England, Habiba Mohamed of Egypt and Joshana Chinappa of India and other noted international players. Last year’s Champion Amanda Sobhy of USA now 10 in the World is not taking part this year. Other women players include Delia Arnold of Malaysia, Misaki Kobayash of Japan, Milou van der Heijden of Netherlands, Deon Saffery of Wales, Liu Tsz Ling and Carmen Lee of Hong Kong.

The Qualifier Draw took place on Monday and Tuesday to decide 4-players to move forward to the men’s and women’s main events, which started yesterday (Wednesday May 27). Today is quarter finals day with matches scheduled from 5:00pm at the HKFC squash centre. All seeded players are through to the quarter finals in both the women’s and men’s events.