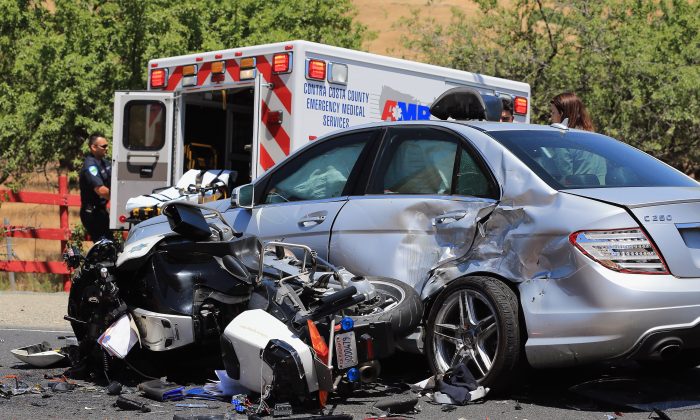 The aftermath of an accident remains in the road after a California Highway Patrol motorcycle officer providing traffic control for a race collided with a car making a u-turn on May 18, 2013, in Brentwood, Calif. The officer was air lifted to the John Muir Medical Center with major injuries. (Doug Pensinger/Getty Images)
Good to Know

Statistics for teen and young drivers are especially grim, according to the National Highway Traffic Safety Administration (NHTSA). In today’s age of fast-paced social media and instant communication, teens on the road can be their own worst enemy.

In 2011, 1,987 young drivers (aged 15–20) were killed in the United States. The data yields a 1 percent increase from the previous year. Additionally, 180,000 young drivers were injured in motor vehicle accidents, according to 2011 NHTSA traffic safety facts.

“Teen drivers are the best and the worst on the road,” said Corey Slovis, MD, professor and chairman at Vanderbilt Emergency Medicine, according to Newswise. “They have great reflexes and usually great vision and hearing—but unfortunately they sometimes do not have the best judgment and may be very overconfident.”

“Expertise in sports takes lots of practice,” he added, “and so does becoming an expert driver.”

Like many of the items on this list, adults can fall prey too. However, young people have always had a foothold on information technology compared to older generations. That, coupled with a younger sense of wisdom and judgment, makes texting while driving a problem that is common with young drivers.

Last year, nearly 10,000 people died on the road in the United States due to alcohol, according to Newswise. These deaths probably could have been avoided if alcohol was not part of the picture. For individuals under the age of 21, drinking is still illegal. But for the young driver who is 21 or over, make a plan for getting home safely before you take your first drink.

3: Always Use Seatbelts and Equip Airbags.

Wearing seat belts is now a national law, according to the U.S. Department of Transportation. Click It or Ticket, a program and website through the NHTSA, has compiled some disturbing facts regarding seat belts and accidents. For example, 77 percent of individuals thrown from a vehicle sustain in fatal injuries. In 2010, if every individual age 5 and over involved in an accident had worn their seat belt, over 3,000 lives would have been spared.

Additionally, if you just got done fixing up your muscle car or you inherit a pre-1990s clinker, consider installing an airbag kit. According to Yahoo, airbag kits for classic cars are available, although they can be very expensive. But if classic cars are your thing, then spend the extra cash on the system if you can.

One of the best behaviors for any driver looking to avoid an accident is to always maintain a safe distance from the car in front of you. State Farm Insurance recommends that young drivers use the “3-second rule.” When the car in front of you passes a stationary object, like a road sign, wait 3 seconds before passing the object yourself, then maintain that same distance. When road conditions deteriorate due to weather or other factors, increase the seconds and distance between your car and the car in front of you. Tailgating or following too closely is the leading cause of rear-end collisions.

5: Keep Distractions as Few as Possible.

Eyes and ears should be on the road, even when you’re not moving. Loud radios take away from car horns, screeching tires, and sirens, which can be life-saving sounds. Particularly for high school and college drivers, a vehicle is not a party on wheels. Packing a car with five or more passengers who are goofing around and laughing is a recipe for disaster.