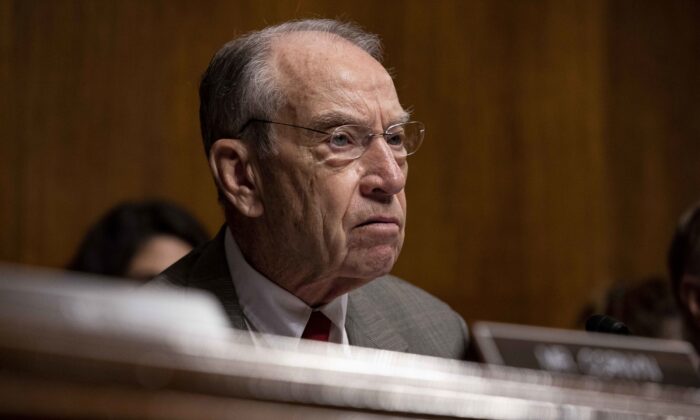 Former Obama administration officials are being asked to give interviews to three top Republican Senators about whether they can shed light on allegations surrounding former Vice President Joe Biden’s son Hunter Biden and Burisma Holdings, a Ukrainian gas company that employed the younger Biden as a board member.

“These interview requests continue the chairmen’s oversight efforts … related to potential conflicts of interest and political influence by Ukrainian elements, including the natural gas firm Burisma, which employed Hunter Biden as a board member while his father was vice president and the public face of the Obama administration’s handling of Ukraine,” the statement from the three senators said.

On Dec. 6, the same Republican senators asked for records and interviews with Democratic National Committee consultant Alexandra Chalupa and former Ukrainian Embassy official Andrii Telizhenko amid their inquiry into whether Ukraine interfered in the 2016 election.

Chalupa and Telizhenko were reportedly involved in Ukraine’s effort to sabotage the campaign of then-candidate Donald Trump in 2016, according to an extensive investigative report by Politico, which Grassley cited in July 2017.

Telizhenko told Politico that the Ukrainian embassy instructed him to look for links between former Trump campaign manager Paul Manafort, Trump, and Russia. The Ukrainian Embassy in Washington later confirmed that Chalupa sought information regarding Manafort, but it said that Chalupa’s request was denied.

During the impeachment inquiry, Democrats have claimed that Republicans and Trump asserted that it was Ukraine and not Russia that interfered in the election and have denounced it as a “debunked conspiracy theory.” However, Trump and most Republicans haven’t promoted that theory but have said Ukraine may have interfered—along with Russia—in the election.

“Contrary to the popular narrative in the ‘main stream media’ that Ukrainian involvement in the 2016 election has been debunked, or ‘no evidence exists,’ there are many unanswered questions that have festered for years,” Johnson said.

The three Republican chairmen requested that Telizhenko and Chalupa give staff-led interviews, and they requested documents from both.

“While there was no collusion between the Trump campaign and Russia, we know that Russia meddled in our democratic processes,” Grassley said earlier this month. “However, certain reports of collusion and interference involving Ukrainian officials have not been sufficiently examined, and the few answers that have been given are inadequate.”

Johnson and Grassley have previously asked the State Department for documents about any internal information about Hunter Biden and Burisma.

“E-mails recently obtained and made public through a FOIA request indicate that Burisma’s consulting firm used Hunter Biden’s role on Burisma’s board to gain access and potentially influence matters at the State Department,” the two senators said.

They noted that Hunter Biden and a former associate, Devon Archer, started serving on the Burisma board around 2014, which is when Joe Biden became the Obama administration’s “public face of the administration’s” Ukraine dealings. They cited a report that said their colleague Christopher Heinz, stepson of former Secretary of State John Kerry, had warned Hunter Biden and Archer about the appearance of a conflict of interest.

Three alleged meetings in 2015 and 2016 are what the two senators are interested in, according to their letter, citing email records. In 2015, Hunter Biden apparently wanted to meet with former Deputy Secretary of State Antony Blinken for “advice on a couple of things.” He also attempted to have a lunch meeting with him several months later.