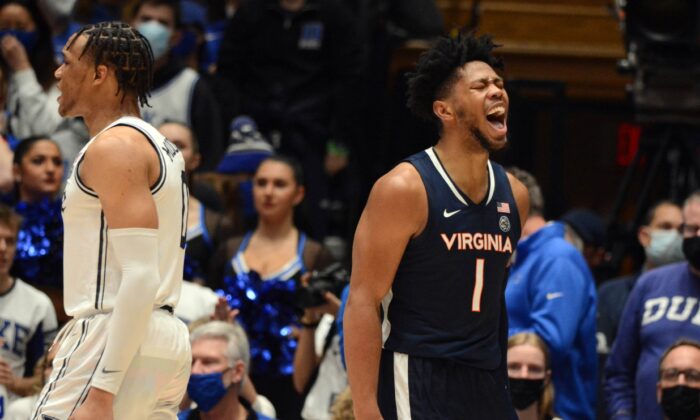 Reece Beekman drained a 3-pointer with 1.1 seconds left to give Virginia a shocking 69–68 victory against No. 7 Duke on Monday night at Durham, North Carolina.

Jayden Gardner scored 17 points with eight rebounds, Kadin Shedrick dumped in a career-high 16 points off the bench and Armaan Franklin had 11 points for Virginia (15–9, 9–5 Atlantic Coast Conference). It was the Cavaliers’ third straight win and fourth in the past five games.

Mark Williams battled foul trouble and finished with 16 points and Trevor Keels had all 12 of his points in the second half for the Blue Devils (19–4, 9–3), who fell into a first-place tie in the league with idle Notre Dame. The loss snapped Duke’s five-game winning streak.

Paolo Banchero was held to a season-low nine points on 3-for-9 shooting, although he added a game-high nine rebounds. His desperation 3 at the final buzzer was off the mark.

Azuolas Tubelis collected 19 points and 11 rebounds as the Wildcats overcame an early 13-point deficit and dominated the second half to beat the Sun Devils in Tempe, Arizona.

Tubelis posted his second straight double-double and shot 7 of 12 from the floor as the Wildcats (20–2, 10–1 Pac-12) posted their fourth straight victory. Arizona outscored the Sun Devils 44–22 to start the second half, building a 26-point lead and swept the season series.

Jay Heath and Marreon Jackson scored 16 points apiece for Arizona State (7–14, 3–8), which was unable to sustain its quick start after outlasting then-No. 3 UCLA for an 87–84 triple-overtime win on Saturday.

Timmy Allen scored a season-high 24 points and Marcus Carr had a key late steal and two free throws as the Longhorns rallied down the stretch to beat the Jayhawks in Austin, Texas.

The game was tied at 72 after a layup by Allen with 2:33 to play. Kansas answered with buckets by David McCormack and Ochai Agbaji for a four-point lead before Texas’ Tre Mitchell hit a banked 3-pointer with 55 seconds remaining to cut the deficit to 76–75.