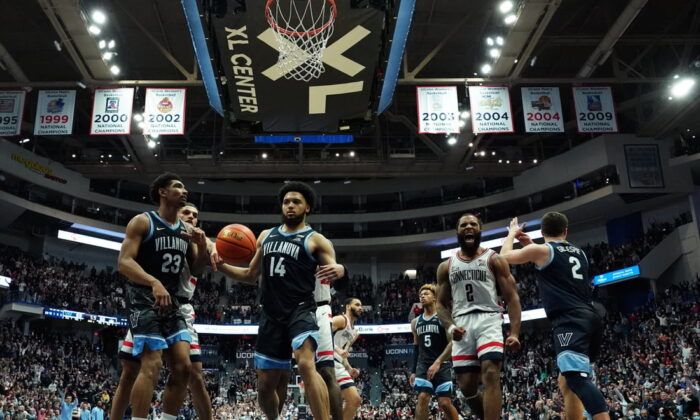 Connecticut Huskies guard R.J. Cole (2) reacts after his go ahead basket in the last seconds of play against the Villanova Wildcats in the second half at XL Center in Hartford, Conn., on Feb 22, 2022. (David Butler II/USA TODAY Sports via Field Level Media)
Sports

R.J. Cole canned a runner with 5.9 seconds left Tuesday night as No. 21 UConn rallied from a four-point deficit in the last 30 seconds to beat No. 8 Villanova 71–69 in Hartford, Connecticut.

After the Huskies (20–7, 11–5 Big East) forced a turnover, Cole drove on Brandon Slater, gained the lane, and sank a short shot as the sellout crowd at XL Center went wild. Cole then drew an offensive foul on Collin Gillespie’s drive to the basket with 1.1 seconds remaining.

Cole finished with 12 points for UConn, while Adama Sanogo pumped in a game-high 20 points on 8–of–14 shooting. Isaiah Whaley scored 13 as the Huskies connected on 10 of 24 3-pointers and forced 14 turnovers.

Gillespie scored 17 points for the Wildcats (21–7, 14–4), while Slater added 15. Jermaine Samuels hit for 13 points and Justin Moore tallied 12. Villanova connected on 12 3-pointers and outscored UConn by six points at the line, but it wasn’t enough.

Ochai Agbaji continued his push to become Big 12 player of the year by netting a game-high 23 points as the Jayhawks shot a blistering 64.1 percent against the Wildcats in Lawrence, Kansas.

Christian Braun added 20 points and Jalen Wilson 17 as the Jayhawks (23–4, 12–2 Big 12) maintained control of the league lead with their sixth win in seven games.

Kansas has won 16 straight at home over Kansas State (14–13, 6–9), which saw its NCAA Tournament hopes continue to fade with a second straight defeat. Markquis Nowell scored 20 points for the Wildcats.

Davion Warren scored 16 points to lead the Red Raiders to a win over the Sooners in Lubbock, Texas. Oklahoma finished with its lowest point total in any game since February 2004.

Bryson Williams added 13 points for the Red Raiders. Umoja Gibson, who scored a season-high 30 points for the Sooners in the earlier upset of Texas Tech, had just five points on 2–of–9 shooting. Jalen Hill led Oklahoma with eight points.

Kennedy Chandler scored 23 points with eight rebounds and six assists to lead the Volunteers past the Tigers in Columbia, Mo.

Javon Pickett scored 16 points and Kobe Brown and DaJuan Gordon added 12 apiece for the Tigers (10–18, 4–11), who have lost four consecutive games and nine of their past 11.

JD Notae scored 22 points and sank a crucial late 3-pointer as the Razorbacks broke a 14-game losing streak at Gainesville, Florida, by toppling the Gators.

Notae scored 12 of his 22 points in the second half, and Davonte Davis tallied 19 points for the surging Razorbacks, who have won 12 of their past 13 contests. Despite foul trouble in the second half, Jaylin Williams notched 15 points and 10 rebounds.

Florida got a career-high 29 points from big man Colin Castleton and 19 from Tyree Appleby.

Jahvon Quinerly scored 17 of his 19 points during a second-half rally that helped send the Crimson Tide to a win over the Commodores in Nashville.

Jordan Wright missed a potential tying layup for Vanderbilt with 4.8 seconds remaining and Alabama (18–10, 8–7 Southeastern Conference) ran out the remainder of the clock to secure the road win.

Keegan Murray poured in 18 of his 28 points in the first half and the Hawkeyes won for the fifth time in six games, pounding the slumping Spartans in Iowa City.

Malik Hall’s 17 points topped the Spartans (18–9, 9–7), who have lost three straight and five of their past six. Julius Marble contributed nine points and eight rebounds, and Tyson Walker had nine points and five assists.