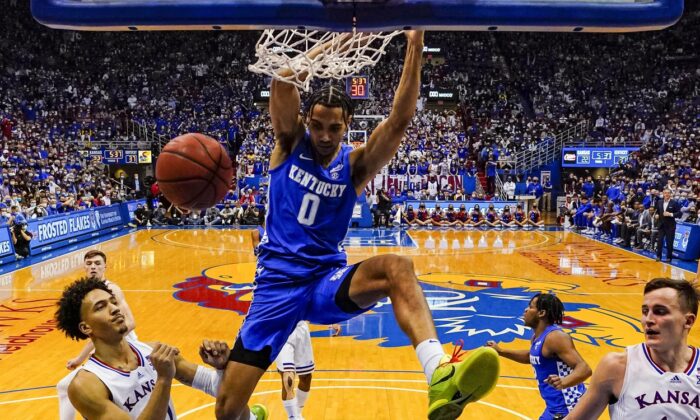 Keion Brooks Jr. scored a career-high 27 points, and Oscar Tshiebwe added a double-double with 17 points and 14 rebounds Saturday as No. 12 Kentucky stomped No. 5 Kansas 80–62 at Lawrence, Kan.

The Wildcats (17–4) claimed their sixth victory in seven games while ending a five-game winning streak for the Jayhawks (17–3), who suffered their first home defeat in their past 18 games.

Kentucky took charge early, silencing the sellout crowd with hot shooting to gain a 20-point command at halftime. The Wildcats never really got pushed in the blueblood showdown of the Big 12/SEC Challenge.

Brooks went 9-for-16 from the field and made 9 of 10 free throws while adding eight rebounds as part of his team’s 41–29 advantage on the boards. Kellan Grady added 12 points and Jacob Toppin 11 as Kentucky shot 50.8 percent from the field.

Jabari Smith had 23 points and 12 rebounds to lead the host Tigers past the Sooners in the Big 12/SEC Challenge.

Walker Kessler added a career-high 21 points to help the Tigers win their 17th consecutive game and their first home game ever as a top-ranked team. The win came a day after Auburn coach Bruce Pearl agreed to a contract extension that runs through the 2029–30 season.

Senior Jordan Goldwire had a career-high 19 points to lead the Sooners (13–8). Goldwire also had four assists and three steals with one turnover.

Andrew Nembhard made four 3-pointers and scored 22 points to help the host Bulldogs roll to a victory over the Pilots in West Coast Conference play at Spokane, Wash.

Gonzaga made a season-high 18 3-pointers (in 41 attempts) while increasing its homecourt winning streak to a national-best 64. The Bulldogs shot 47.9 percent overall while beating Portland (11–10, 2–4) for the 14th straight time and 48th in the past 50 meetings.

The Wildcats overcame a 3-for-23 shooting performance from 3-point range behind 14 points each from Bennedict Mathurin and Oumar Ballo to beat the Sun Devils in a Pac-12 game at Tucson, Ariz.

Christian Koloko also had 12 points, 13 rebounds and five blocked shots for Arizona, which made a concerted effort to score inside after its perimeter shooting went cold. Koloko and Ballo, Arizona’s interior players, were a combined 7 of 13 from the field and went to the free-throw line 16 times and made 12.

Coming off their worst loss of the season against Georgia, the Crimson Tide responded with an upset victory over the Bears in Tuscaloosa, Ala., behind 20 points from Jahvon Quinerly.

Alabama (14–7) is now 5–1 against AP Top 15 teams on the season, while Baylor (18–3) saw its three-game winning streak snapped and also lost on the road for the first time this season in the process.

The Crimson Tide had five players in double figures and forced Baylor into 16 turnovers. Alongside Quinerly, Jaden Shackelford scored 19 points and added nine rebounds, Juwan Gary scored 15 points, Keon Ellis had 11 and JD Davison rounded out the group with 14 points of his own.

Jules Bernard had 16 points and nine rebounds to help the Bruins shake off the loss of key players and rout Stanford in the Pac-12 matchup in Los Angeles.

Jake Kyman contributed 15 points off the bench, and Tyger Campbell had 10 points and nine assists for the Bruins (16–2, 8–1 Pac-12), who moved back into sole possession of first place in the conference. Isa Silva scored eight points to lead Stanford (12–7, 5–4), which had upset No. 15 USC on Thursday.

UCLA was without leading scorer Johnny Juzang (18.1 points per game) for a second straight game after he tested positive for COVID-19 on Thursday. Jaime Jaquez Jr., the third-leading scorer (12.9) and top rebounder (5.6), went down with an apparent ankle injury during the opening half and did not return.

Josh Carlton recorded a double-double while Fabian White Jr. chipped in 11 points despite persistent foul trouble as the Cougars extended their winning streak to 10 games with a conference road victory over the Knights in Orlando.

Carlton paired 13 points with 15 rebounds and was a steadying force down the stretch for the Cougars (18–2, 7–0 American), who labored offensively throughout the second half.

Darin Green Jr. led the Knights (12–7, 4–5) with 14 points while Darius Perry added 11 points, five rebounds and six assists. Perry was instrumental in helping the Knights chip away at what was a 40–25 deficit early in the second half, teaming with Mbacke Diong (eight points) to fuel the comeback.

AJ Griffin made two 3-point baskets during a 12–0 run after the Cardinals tied the game, helping the Blue Devils pull out a road victory in Atlantic Coast Conference play.

Griffin finished with 22 points as the Blue Devils (17–3, 7–2 ACC) won their third game in a row. This was another tough one as Louisville came storming back from an early deficit.

Louisville (11–10, 5–6) was playing its first game since the departure of coach Chris Mack. El Ellis pumped in 18 points off the bench to go with Dre Davis’ 16 points and Malik Williams’ 10 points for Louisville, which lost for the sixth time in its last seven games.

Max Christie had 16 points, Malik Hall added 15 and the Spartans pulled away from the visiting Wolverines at East Lansing as Michigan State’s bench outscored Michigan’s reserves 33–6.

Joey Hauser supplied 14 points and A.J. Hoggard had a double-double with 11 points and 10 assists for the Spartans (16–4, 7–2 Big Ten). Gabe Brown chipped in nine points as Michigan State bounced back from a one-point loss at Illinois.

The Red Raiders turned in one of their more dominant performances of the season by crushing the visiting Bulldogs in a 26-point victory as part of the SEC/Big 12 Challenge at Lubbock, Texas.

Adonis Arms stepped in for an injured Terrence Shannon and led the way with 16 points—15 in a dominant first half—and seven assists. Kevin Obanor scored 13 and Mylik Wilson contributed 12 as Texas Tech (16–5) eradicated the aftertaste of a double-overtime loss at No. 5 Kansas earlier in the week.

The Bulldogs (13–7) fell behind by double digits late in the first half and never really recovered. Iverson Molinar led Mississippi State with 12 points but only three after halftime when the Red Raiders extended a 37–22 lead to the final margin.

Isaiah Mobley scored 24 points, Boogie Ellis added 21 points on 8-for-10 shooting from the floor, and the Trojans rallied from a sluggish start to hold off the Pac-12 Conference counterpart Golden Bears in Los Angeles.

The Trojans (18–3, 8–3) fell behind by 11 points midway through the first half. The early deficit mirrored USC’s start on Thursday against Stanford, which ended in a 64–61 loss.

Makale Foreman went 3 of 5 from 3-point range off the bench and led Cal (9–12, 2–8) with 13 points, and Jalen Celestine went 3 of 3 from long range en route to 12 points. Jordan Shepherd and Andre Kelly added another 12 points each as the Golden Bears lost their seventh straight game.

Timmy Allen hit the game-winning free throw with 6.2 seconds left and Courtney Ramey scored a season-high 18 points as the host Longhorns held on to beat the Volunteers in a wild Big 12/SEC Challenge game in Austin, Texas.

Texas (16–5) forged a 15–0 run over a seven-minute stretch that began late in the first half to erase a two-point deficit. Then Tennessee, which trailed by 17 points with 7:57 to play, clawed back to tie the game at 51 on Victor Bailey Jr.’s layup with 1:23 left, capping a 16–0 run for the Volunteers.

After a pair of missed free throws by Ramey and back-to-back missed shots by Tennessee, Allen hit one of two free throws with 6.2 seconds remaining. The Volunteers called timeout and set up a final play for Josiah-Jordan James, but his 3-point attempt missed at the buzzer.

Chuck O’Bannon Jr. and Mike Miles scored 19 points each as the Horned Frogs defeated the ranked Tigers in the Big 12/SEC Challenge in Fort Worth, Texas.

Damion Baugh added 14 points as TCU (14–4) claimed its first victory over a ranked SEC opponent since 1954.

Tari Eason scored 16 points, Darius Days had 14 points and 12 rebounds, Eric Gaines scored 14 and Brandon Murray had 10 to lead the Tigers (16–5), who lost for the fourth time in five games.

R.J. Cole scored 25 points and Adama Sanogo had 10 points and eight rebounds as the Huskies held off the cold-shooting Blue Demons for their fifth consecutive victory in Chicago.

The ranked Musketeers came back from a 17-point halftime deficit to stun the host Bluejays in Omaha, Neb., using a barrage of 3-pointers to go on a 19–0 run to open the second half.

Paul Scruggs led Xavier (15–5, 5–4 Big East) with 18 points and Zach Freemantle added 16 points and pulled down eight rebounds. Xavier tried to match up inside with the Bluejays in the first half and was held to 19 points. In the second half, the Musketeers relied on their perimeter game to open up the lanes for scoring opportunities

Freshman Ryan Nembhard led Creighton (12–7, 4–4) with 23 points. He was 3 of 6 on 3-pointers. Ryan Kalkbrenner scored 13 points, pulled down eight rebounds, and blocked a pair of shots in defeat.

Izaiah Brockington scored 15 points and grabbed six rebounds to lead the Cyclones past the Tigers in Ames, Iowa, in the Big 12/SEC Challenge.

DaJuan Gordon scored 15 points for the Tigers (8–12), who led by as many as five points during the first half. Amari Davis scored 11 points and Jarron Coleman added 10.

Kofi Cockburn scored 22 points and grabbed nine rebounds as the visiting Fighting Illini rallied down the stretch to stay in first place in the Big Ten Conference with a win over the Wildcats in Evanston, Ill.

No one else got into double figures for the Fighting Illini (15–5, 8–2 Big Ten), but Alfonso Plummer came through with three key free throws in the last 12 seconds to hold off the upset bid. Illinois was able to win despite making only 5 of 18 3-pointers and getting outscored 15–2 in points off turnovers.

Pete Nance carried the scoring load for the Wildcats (9–10, 2–8) with 21 points, but just didn’t get enough help. Northwestern made just 35.7 percent of its field-goal tries and failed to overcome a 32–16 Illini advantage in points in the paint.

Luka Brajkovic racked up 22 points and the Wildcats responded a few days after their first loss in about two months, defeating the Explorers in Davidson, N.C.

The Wildcats made a bid to stay in the Top 25 despite a two-point home loss to Virginia Commonwealth on Wednesday night. This week’s spot in the rankings marked Davidson’s first Top 25 appearance since the 2014-15 season.