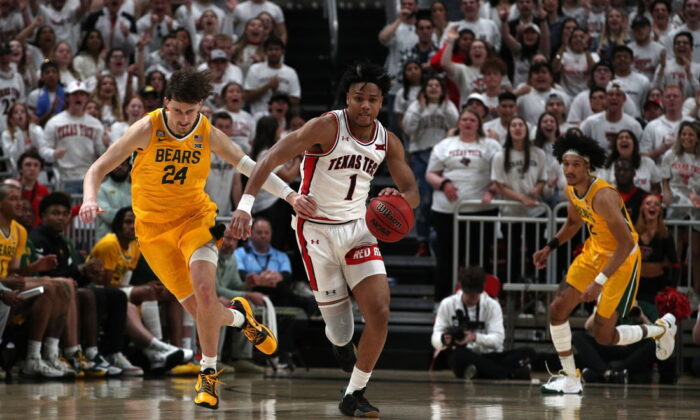 Kevin Obanor scored 23 points and grabbed 13 rebounds, both season highs, as No. 11 Texas Tech came from behind to overwhelm No. 7 Baylor 83-73 on Wednesday in a key Big 12 Conference matchup in Lubbock, Texas.

The Red Raiders (20–6, 9–4 Big 12) trailed by seven points at halftime but rallied behind Obanor’s 21 second-half points.

Bryson Williams added 17 points for the Red Raiders, who swept the season series with Baylor. Texas Tech played without Kevin McCullar, who was out with an ankle sprain.

Drew Timme scored 19 points and freshman Chet Holmgren added 18 while matching his career high of 17 rebounds as the Bulldogs beat the Waves in Malibu, Calif.

Gonzaga defeated the Waves for the 43rd consecutive time. Houston Mallette scored 25 points for Pepperdine (7–21, 1–12), which lost for the 12th time in the past 13 games.

Freshman Jabari Smith scored a career-high 31 points to help the Tigers survive a challenge from the visiting Commodores.

Auburn (24–2, 12–1 Southeastern Conference) pulled two games clear of Kentucky and Tennessee for the top spot in the league with five games to go. Vanderbilt (13–12, 5–8) dropped into a tie for 10th with Texas A&M.

Smith’s 10-of-16 shooting and Walker Kessler’s 22 points allowed Auburn to pull away from the Commodores. SEC leading scorer Scotty Pippen Jr. was his usual self for Vanderbilt with 29 points, six assists and five rebounds.

Zach Edey had 14 points and eight rebounds and Mason Gillis contributed 11 points and seven boards as the Boilermakers defeated the Wildcats in Evanston, Ill.

Purdue (23–4, 12–4 Big Ten), which led by as many as 15 points in the second half, has won two straight and eight of nine to take sole possession of first place in the Big Ten by a half-game over idle Wisconsin.

Omoruyi, the beneficiary of two highlight-reel alley-oops, posted his fifth double-double of the season despite being matched up down low with Kofi Cockburn. The Illinois star led all scorers with 20 points and added 10 rebounds.

Adama Sanogo had 20 points and 16 rebounds and Tyrese Martin added 16 points and 10 rebounds for the Huskies, who took control in the second half and defeated the Pirates in Storrs, Conn.

Jahvon Quinerly collected 21 points and eight assists to lead the Crimson Tide to a comeback win over the Bulldogs in Tuscaloosa, Ala.