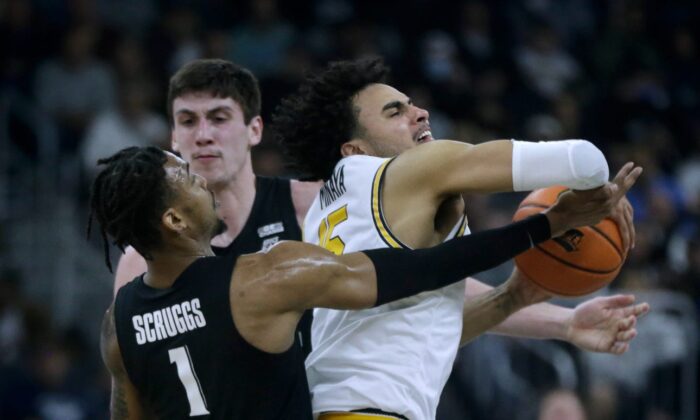 Jared Bynum scored a game-high 27 points and hit a crucial 3-pointer in the third overtime to help No. 11 Providence outlast visiting Xavier, 99–92 in a Big East game on Wednesday.

Bynum sustained an apparent leg injury in a scramble for the rebound after a subsequent miss and left the game. Noah Horchler, who scored 10 points, made two free throws to close the scoring.

A.J. Reeves scored 16 points for the Friars. Kunkel led Xavier with 20 points and Paul Scruggs, forced the third overtime with a buzzer-beating 3-pointer, added 19. The game was delayed during regulation because of condensation on the floor, making play hazardous.

The 7-foot-1 sophomore raised his block total to 131 on the season, breaking the mark of 126 established by Kyle Davis in 2002–03. Kessler produced 12 points and 10 rebounds against Ole Miss.

Oscar Tshiebwe scored 17 points and grabbed 16 rebounds as the Wildcats, despite playing short-handed, came from behind in the second half to defeat the visiting Tigers in Lexington, Ky.

Tshiebwe had his 10th straight double-double and 22nd of the season. Kellan Grady, Davion Mintz and Bryce Hopkins—the last of whom entered the game averaging two points per game—added 13 points each. The Wildcats (23–5, 12–3 SEC) won their second straight game while playing without injured starting guards Sahvir Wheeler and TyTy Washington Jr.

Jeremy Roach scored 15 points off the bench and AJ Griffin hit key shots in the final minutes as the Blue Devils survived for a road victory at the Cavaliers in Charlottesville, Va.

Kihei Clark poured in 25 points, Jayden Gardner posted 16 points and Reece Beekman had 11 points for Virginia (17–11, 11–7), which lost for just the second time in its last seven games.

Steven Crowl scored 20 points and the Badgers held off the host Golden Gophers in Minneapolis to move into a tie for the Big Ten lead.

Payton Willis hit the second of two free throws to bring Minnesota even at 62–62 with 2:35 left when Wisconsin’s leading scorer Johnny Davis picked up his fifth foul.

Kyler Edwards scored 21 points and Taze Moore had 18 points and nine rebounds as the visiting Cougars beat the Green Wave.

Jalen Cook scored 19 points and Kevin Cross had 16 points and eight rebounds for Tulane (12–12, 9–6), which had won its previous two games in a push for a postseason bid.

Andrew Jones scored 21 points and Marcus Carr posted 16 of his 19 points in the second half as the Longhorns came from behind to beat the Horned Frogs in Austin, Texas.

Texas (20–8, 9–6 Big 12) trailed by five points at halftime and was down by 10 with 13:20 to play before turning up the heat on defense to change the momentum and take charge. Timmy Allen added 17 points for the Longhorns, and Christian Bishop contributed 10 points and a career-high five blocked shots.