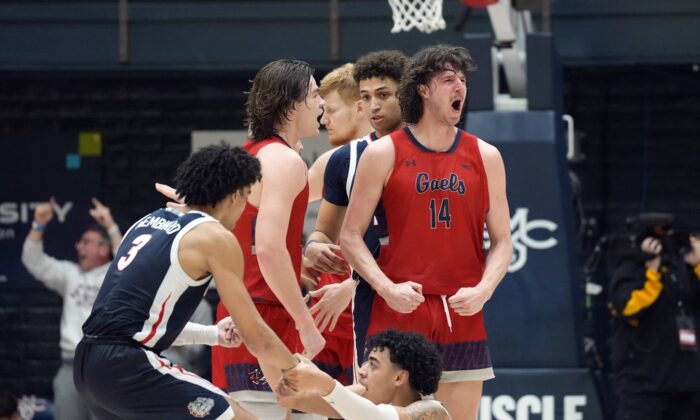 It marked the second time the Gaels have defeated a No. 1 team in 13 opportunities. The other time was the school’s memorable 60–47 victory over Gonzaga in the 2019 West Coast Conference Tournament title game.

Rasir Bolton scored 16 points, Andrew Nembhard had 15 and Julian Strawther tallied 14 for the Bulldogs, who were held to a season-low point total that was far below their national-best average of 89.5 per game.

Jabari Walker had 15 points and 14 rebounds, Tristan da Silva scored 19 points, and the Buffaloes upset the Wildcats in Boulder, Colo., denying the visitors a chance to clinch a share of the Pac-12 Conference title

Keeshawn Barthelemy also scored 15 points for Colorado (19–10, 11–8 Pac-12), which has won five straight home games against Arizona. The Buffaloes made 10 of their first 13 shots out of halftime to erase a five-point Arizona lead.

Kennedy Chandler scored 13 points, including a key floater in the lane with 32 seconds left, and the Volunteers rallied from 11 points down in the second half to knock off the Tigers in their Southeastern Conference matchup in Knoxville, Tenn.

Santiago Vescovi scored nine of his 14 points in the final seven minutes, and Zakai Zeigler added 13 points and three steals as Tennessee (21–7, 12–4 SEC) snapped a six-game losing streak against Auburn and improved to 15–0 at home. The Volunteers also tightened the SEC race, pulling within a game of first-place Auburn (25–4, 13–3) and tying No. 6 Kentucky and No. 18 Arkansas for second.

Tennessee shot only 32.8 percent from the field and committed 18 turnovers. But the Volunteers dominated the boards, 54–31. It was the third straight road loss for Auburn. The Tigers were led by Jabari Smith’s 27 points and eight rebounds. K.D. Johnson added 18 points.

Tyson Walker hit the game-winning 3-pointer with 1.4 seconds remaining as the Spartans bolstered their NCAA Tournament hopes with an upset of the Boilermakers in East Lansing, Mich.

Zach Edey scored 25 points and Jaden Ivey had 16 points for Purdue (24–5, 13–5), which fell out of a first-place tie with Wisconsin in the conference standings.

Flo Thamba scored 18 points and Jeremy Sochan added 17 as the Bears roared back from a slow start and tightened the Big 12 race by downing the Jayhawks at Waco, Texas.

Baylor (24–5, 12–4 Big 12) triumphed for the fifth time in six games. James Akinjo netted 12 points and Adam Flagler scored 13 for the Bears, who fell behind 16–4 at the outset and did not lead until the second half. Matthew Mayer added nine points and 12 rebounds, while Thamba grabbed nine boards.

Ochai Agbaji scored a game-high 27 points for Kansas (23–5, 12–3) but made just 8 of 22 shots as the Jayhawks had their four-game winning streak snapped. Christian Braun posted 17 points and 10 rebounds, and David McCormack added 10 points and 13 boards.

The Razorbacks (23–6, 12–4 SEC) stretched their winning streak to four games while snapping a two-game run for the Wildcats (23–6, 12–4) as the programs pulled into a second-place tie behind Auburn atop the conference standings.

Arkansas overcame a 30-point, 18-rebound effort from Kentucky’s Oscar Tshiebwe to win for the 13th time in 14 games, prevailing in a contest that had 17 lead changes.

Mark Williams scored a career-high 28 points on 11-of-14 shooting and Paolo Banchero and A.J. Griffin lit it up from beyond the arc as the visiting Blue Devils dominated the Orange.

In the final regular-season matchup between Duke’s Mike Krzyzewski and Syracuse’s Jim Boeheim—the two winningest coaches in Division I history—the Blue Devils stormed out of the gates and never looked back. Krzyzewski, who is retiring at season’s end, improved to 12–5 all-time against Boeheim.

Mike Miles Jr. racked up 26 points and had a huge steal in the final seconds as the Horned Frogs roared back and owned the final minutes in a win over the Red Raiders in a Big 12 Conference dustup in Fort Worth, Texas.

Emanuel Miller added 11 points and Damion Baugh had 10 for TCU (18–9, 7–8 Big 12), which won for the second time in its past three games in its fight for a spot in the NCAA Tournament. The Horned Frogs were playing their fourth game in a stretch of eight days.

A.J. Reeves shot 7-for-10 from 3-point range and scored 23 points as the Friars clinched their first Big East regular-season title in program history with a victory over the visiting Bluejays.

Nate Watson and Al Durham each contributed 12 points while Justin Minaya had 11 rebounds for Providence (24–3, 14–2 Big East), which had three conference games canceled because of a COVID-19 pause in January.

Tyger Campbell had 20 points and five assists while Jaime Jaquez Jr. scored 17 points as the Bruins, playing without the injured Johnny Juzang, bounced back from a loss at Oregon two nights earlier and routed the Beavers in Corvallis, Ore.

Maurice Calloo scored 13 points and Roman Silva and Glenn Taylor Jr. each added 10 for Oregon State (3–24, 1–16), which has lost 14 consecutive games. The Beavers dropped Thursday’s game against No. 16 Southern California in double overtime.

Johnny Davis scored 15 of his team-high 19 points in the second half as the Badgers held off the Scarlet Knights in Piscataway, N.J., to take over the top spot in the Big Ten Conference.

Drew Peterson’s game-winning 3-pointer with 14 seconds left capped his 20-point night as the Trojans ran their winning streak to six by defeating the Ducks in Eugene, Ore.

Justice Hill hit a tiebreaking 3-pointer with 39 seconds left as the Racers rallied for a victory over the host Redhawks in Cape Girardeau, Mo.

The Racers (28–2, 18–0 Ohio Valley Conference) became the sixth team in the 74-year history of the OVC to go unbeaten in conference play.

K.J. Williams led all scorers with 23 points, and Trae Hannibal added 20 for Murray State, which shot 43.3 percent from the field. Tevin Brown contributed 15 points and Hill finished with 11 as the Racers beat the Redhawks for the 10th straight time.

Timmy Allen scored a season-high 26 points and grabbed a career-best 10 rebounds as the Longhorns outlasted the reeling Mountaineers in Big 12 Conference play in Morgantown, West Virginia.

Marcus Carr finished with 15 points, and Jase Febres added a season-best 14 for the Longhorns, who shot 63.4 percent (26-for-41) from the field for the game.

Jaden Shackelford came off the bench to score a game-high 21 points as the Crimson Tide raced to a 23-point halftime lead and defeated the Southeastern Conference rival Gamecocks in Tuscaloosa, Ala.

Erik Stevenson scored 17 points and dished out six assists for the Gamecocks (17–11, 8–8), who had their four-game winning streak snapped.