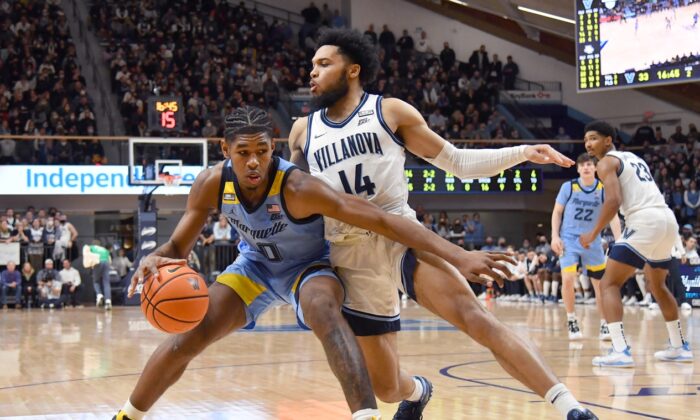 Justin Lewis scored 21 points, including the go-ahead 3-pointer with 13 seconds remaining, to lift visiting Marquette past No. 11 Villanova, 57–54, on Wednesday.

Lewis hit five treys, Greg Elliott added 14 points and Darryl Morsell had 10 for the Golden Eagles (13–6, 5–3 Big East), who won their fifth in a row.

Marquette ended the game on a 7–0 run.

K.D. Johnson, who played for the Bulldogs last season as a freshman before transferring, scored 12 points to help the host Tigers extend their winning streak to 14 games.

Georgia (5–13, 0–5) got 16 points from Christian Wright. The Bulldogs, who were without leading scorer Kario Oquendo for undisclosed reasons, lost their seventh straight game.

Sahvir Wheeler scored 12 points and Davion Mintz added 10, including a crucial free throw in the final seconds, as the Wildcats came from behind and outlasted the Aggies in College Station, Texas.

Texas A&M’s Henry Coleman III led all scorers with 17 points. Aaron Cash grabbed 11 rebounds for the Aggies (15–3, 4–1), who had an eight-game winning streak snapped. Texas A&M finished 1 of 22 from 3-point range and made just 5 of 13 free throws.

Jaden Shackelford scored 26 points as the Crimson Tide ended a three-game losing streak by knocking off the Tigers in Tuscaloosa, Ala.

Tari Eason scored 26 points and Brandon Murray added 19 to lead the short-handed Tigers (15–3, 3–3). They were playing their third consecutive game without third-leading scorer Xavier Pinson and saw second-leading scorer and leading rebounder Darius Days miss the second half because of an apparent ankle injury.

Jack Nunge scored 15 of his team-high 23 points after halftime and Colby Jones added 13 points as the Musketeers rallied past the Blue Demons in Chicago.

Jalen Terry had a clean look at a potential game-winning 3-pointer from the baseline, but his shot was no good as time expired. DePaul’s David Jones led all scorers with 26 points.