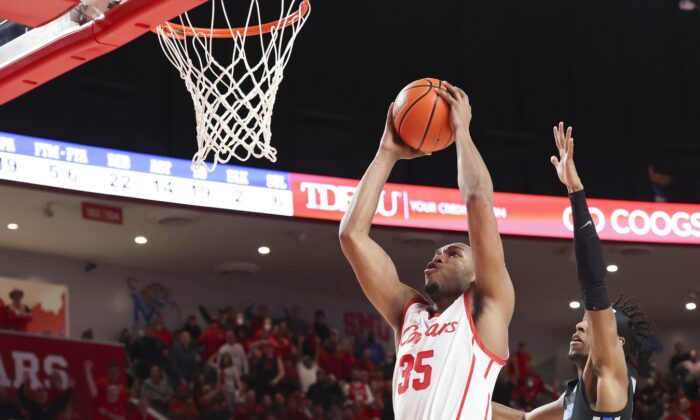 White, who added three blocks to his ledger, participated in his 110th victory, snapping a tie with former Houston standout guard Michael Young. Kyler Edwards had 10 points, nine rebounds and seven assists for the Cougars while Jamal Shead added 12 points and eight assists.

Azuolas Tubelis scored 22 points and Bennedict Mathurin added 20 as the host Wildcats used a dominant second half to put away the Beavers and claim a seventh consecutive win.

Jaylen Clark recorded career highs of 18 points and 11 rebounds, and the Bruins rode a big second-half run to a rout of the Cougars in Los Angeles.

UCLA (18–5, 10–4 Pac-12) jumped to a 20–7 lead through the first 8:11, with Clark starting in place of Tyger Campbell, who served a one-game suspension for an unspecified violation of team rules.

Washington State (14–11, 7–7) dropped its fourth consecutive game. The Cougars struggled shooting, finishing the game a dismal 28.3 percent—24 percent in the second half.

Chevez Goodwin scored a season-high 24 points on 11-of-14 shooting and grabbed nine rebounds as the Trojans defeated the Huskies in a Pac-12 Conference game in Los Angeles.

Drew Peterson, the conference’s reigning Player of the Week, added 14 points, seven assists and six rebounds for the Trojans (22–4, 11–4 Pac-12), who posted their third straight victory. USC’s leading scorer this season, Isaiah Mobley, returned after missing two games with concussion-like symptoms after sustaining a broken nose Feb. 5 at Arizona. Mobley wore a face mask and finished with 12 points and a game-high eight assists.

KJ Williams scored 25 points and the Racers coasted to their 15th consecutive win by defeating the Governors in an Ohio Valley Conference matchup in Murray, Ky.

Williams shot 12-for-15 from the field and pulled down seven rebounds, while Tevin Brown added 13 points for Murray State (25–2, 15–0 OVC). Four other Racers scored in double digits as Murray State shot 64.3 percent (36 of 56) from the field