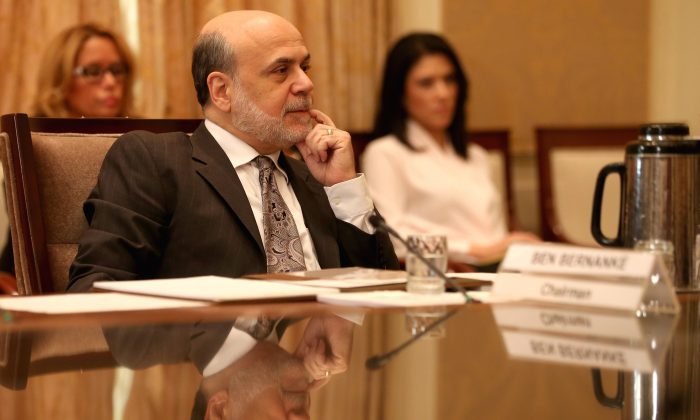 Federal Reserve Board Chairman Ben Bernanke participates in a meeting of the Board of Governors at the Federal Reserve in Washington, Oct. 24. (Mark Wilson/Getty Images)
Business & Economy

Unless something goes terribly wrong in the last weeks of 2013, this year will be remembered as a very good year for equities. The 23.4 percent the Dow Industrials made (all data as of Dec. 18) is above the long-term average of 15 percent and the index set a few record high marks along the way.

The Federal Reserve did its part and only scaled back on the purchase of U.S. Treasury bonds very late in the year and in a minimal way. The summer slump in the market was mainly due to traders’ fears the central bank would significantly reduce money printing. It didn’t then and the market went off to the races in the fall.

The Dow did a little better than the German Dax, worse than Japan’s Nikkei (up 50 percent in yen), but much better than China’s Shanghai Composite, down 2.41 percent for the year and more than 50 percent off its all-time high set in 2007.

Tech and other innovative stocks also helped the markets, with Tesla (up 336 percent), Yelp (up 249 percent) and Netflix (up 306 percent) outperforming. Twitter had a successful IPO and added to the tech glitter. As a result, the Nasdaq Composite was the clear winner among U.S. indices, rising 35 percent.

But there are legitimate concerns the party might be over in 2014. Valuations are stretched and many companies are guiding lower on earnings. Speculation has increased to levels not seen since 2007 and the effect of the Fed’s taper will not be felt until next year.