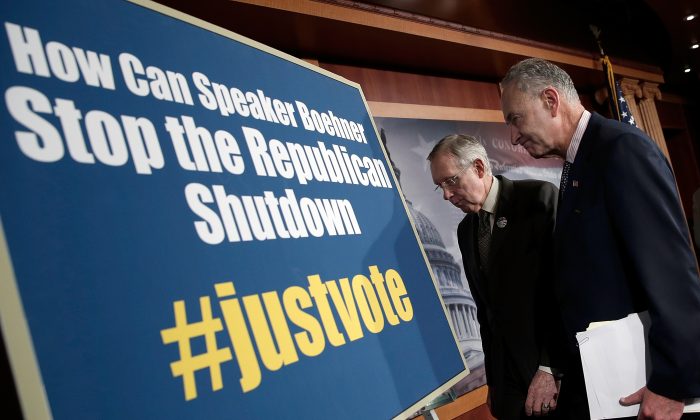 At the end of the 16-day October 2013 government shutdown, President Barack Obama waved at reporters and said, “It won’t happen again.” He may be right. Congress passed a compromise budget on Dec. 18, which mitigates some sequester effects and prevents another shutdown for at least two years, but toxic ingredients are still simmering in the congressional cauldron.

If the 113th Congress was not in gridlock it would end the sequester, pass a farm bill, reform immigration policy and financial regulations, and fine tune the Affordable Care Act.

Unfortunately, many of the problems that led to a standoff this year and that make such achievements a reach, will continue.

America has been polarized enough to shut down its government before, but this time the disagreements are deeper and the stakes are higher, according to John Cioffi, associate professor of political science at The University of California–Riverside. He wrote, “The current gridlock on Congress is hardly unprecedented, but it has worsened as a result of developments in the composition and character of the Republican Party and, to a lesser extent, of the Democratic Party.”

Cioffi expects a more functional Congress in 2014. “The center of gravity in the Republican Party has shifted somewhat. The electoral survival of some of the more moderate members depends on avoiding brinksmanship.” Those GOP moderates are “in an excruciatingly painful dilemma,” he said. If they work with Democrats to resolve problems, they may face primary challengers who use their compromises against them.

Most of the public blamed the GOP for the government shutdown, and the party leadership realized it should not be repeated. Yet firebrands such as Texas Republican Sen. Ted Cruz resist their party leaders. “The tea party faction see no problem—there’s an internal narrative that all problems are from being insufficiently right-wing,” said Cioffi.

Budget Deal Reached
After the shutdown ended, negotiators for the House and Senate majorities got together to hammer out a minimum accord approved by their respective party leadership to avert a 2014 trip to the edge of the fiscal cliff.

Sen. Patty Murray (D-Wash.) and Wisconsin Republican Rep. Paul Ryan announced the accord Tuesday, Dec. 10. It was passed by both chambers before the holiday break.

The deal restores an estimated $65 billion in automatic spending cuts through the end of the next budget year, which runs to Sept. 30, 2015. The agreement does not end the across-the-board spending cuts called the sequester, but it moderates them.

The increases will be offset by a variety of spending reductions and increased fees elsewhere in the budget totaling about $85 billion over a decade, enough for a largely symbolic $20 billion cut in the nation’s $17 trillion debt.

The farm bill remains badly needed but difficult to negotiate. Finding a compromise on cuts to the nation’s $80 billion-a-year food stamp program has been the toughest obstacle. The House passed a bill this summer that would cut $4 billion from food stamps annually and allow states to create new work requirements for some recipients. The Democratic Senate, backed by President Barack Obama, passed a farm bill with a $400 million annual cut, or a tenth of the House cut. Legislators hope to have a bill to vote on in January.

Kathryn Boor, dean of Cornell University’s the College of Agriculture and Life Sciences, warned that legislative failure hurts everyone. She stated in a university release, “The inability to get a Farm Bill in place will touch every household in the U.S., starting with ramping up the price of our milk to eventually increasing the sticker prices on a variety of foods.”

The Dodd–Frank Wall Street Reform and Consumer Protection Act will bring more changes to financial rules, mostly via administrative actions. “A raft of financial and regulatory changes are coming through” in 2014, said Cioffi. “It’s going to be very important.”

“Income inequality is beginning to emerge as a salient issue,” said Cioffi. For now, he expects Democrats to beat the drums on the subject, but he does not expect them to create any new laws or policies to address it. “People are starting to become extremely anxious about their economic well-being and economic futures. That’s a sea change,” said Cioffi.

Immigration reform and fine-tuning the Affordable Care Act face bleak prospects, according to Cioffi. Republicans have nothing to gain from compromising with Democrats on these issues, and reason to expect that any compromise will come back to haunt them.