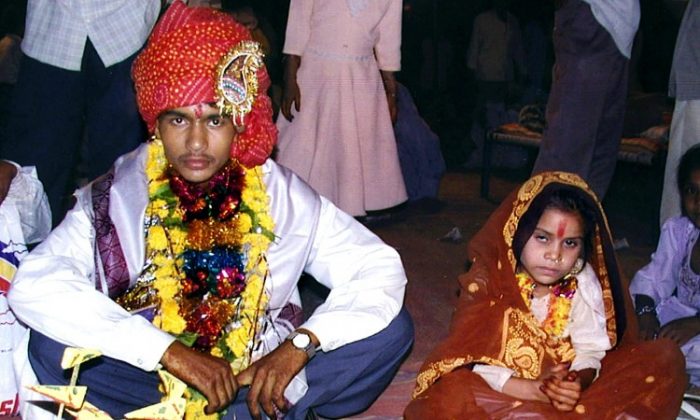 A 16 year old boy waits to be married to a much younger girl during a mass child marriage ceremony in Indore, India, on May 15 2002. (AFP/Getty Images)
International

Despite international commitments to end child marriage, one in three girls in developing countries (excluding China) will be married before they turn 18 by 2030, according to the latest United Nations report on the issue. In 2010, a total of 67 million women around the world had gotten married while they were still under 18—half in Asia, one-fifth in Africa.

“Whenever I saw him, I hid. I hated to see him,” Tehani, an 8-year-old Yemenese girl, recalled the early days of her marriage in the U.N. Population Fund report. Tehani was married at age 6 to a 25-year-old man.

Below are the top 12 countries by percentage of women 20 to 24 years old who married or entered into union before age 18 over the past decade.

With a population of more than 1.2 billion, India has the second largest population in the world after China. India would be ranked No. 1 in terms of the absolute number of young women who have entered marriage before age 18.

Home to 16.4 million people, this western African country is one of the least developed in the world. Nearly 30 percent of rural adolescent women between 15 and 19 have already begun childbearing.

With a population of nearly 6 million, Sierra Leone ranked last of 179 countries on the UNDP Human Development Index in 2008. Until recently, this western African country did not have a minimum age for marriage under customary law.

Malagasy law only required women to be 14 years old to be married before a new 2007 law set marriageable age at 18. In an island country with 21.3 million residents, 34 percent of women begin childbearing while between age 15 and 19.

In this southern African country, about half of the women between 20 and 24 years old were married before their 18th birthday. In 2010, women aged 20-24 in rural areas were twice as likely to be married before 18 than those living in urban areas. The U.N. has been working with locals to launch an advocacy campaign aimed at policymakers.

On average, one out of every two girls in Mozambique will be married before the age of 18. The number of child marriages is declining however, with a drop of 4 percent over the past 10 years.

In this landlocked country of mostly desert or semi-desert, the median age at marriage for women is 17 while for men it is 26. Just over half of Mali’s 15.8 million population lives on less than $1 a day.