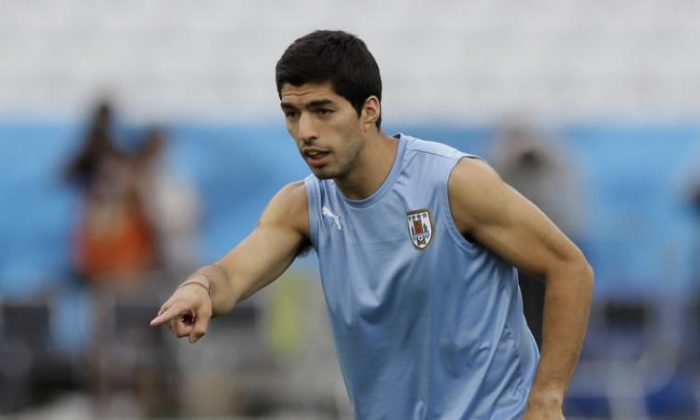 Top 10 Most Expensive Football Transfers of the Summer So Far

When it comes to the transfer market, 2014 has already been a remarkable summer.

The world-record 100 million-euro move of Gareth Bale to Real Madrid last year looked like a fee that would be hard to come close to as Financial Fair Play protocols tighten their grip, but we have already seen the €80m barrier broken twice since the end of last season in a hectic transfer window so far.

With clubs enjoying greater commercial and broadcast revenues than ever and following the veritable shop window that is the World Cup, it is safe to expect a significant number of more big signings between now and September – but these are the biggest so far.

Luis Suarez may have seen his World Cup end in ignominy, but it wasn’t long after his time in Brazil that Barcelona paid the biggest fee of the summer so far – a staggering 89.3 million euros – to bring the Premier League player of the year to Spain.

Not to be outdone by its Clasico rival, Real Madrid splashed out €88.2m on James Rodriguez, who captured the attention of the world with his Golden Boot-winning performances in Brazil and promptly moved to the Spanish capital from Monaco, one of the biggest spenders of last summer. Interestingly, this is the only transfer currently in the top 10 not to include a club from England’s top flight.

David Luiz will not be missed at Chelsea according to Jose Mourinho, but Paris Saint-Germain will hope that its €54.57m outlay on the Brazilian – the highest fee ever paid for a defender – will not go to waste. Chelsea, of course, wasted little time in reinvesting the funds, paying €41.9m to Atletico Madrid to bring Diego Costa to Stamford Bridge.

Currently in fifth place is Alexis Sanchez, who became Arsenal’s second most-expensive player when he joined from Barcelona. Just behind him is Luke Shaw, whom Manchester United made the costliest teenager in football history when it forked out just over €41m to Southampton for his services.

Shaw’s new United teammate Ander Herrera is seventh in the table, with Athletic Bilbao receiving €39.69m for the midfielder, with Romelu Lukaku’s club-record transfer to Everton placing him in eighth.

In ninth place – the fourth deal involving Chelsea in the table – is Cesc Fabregas, who called time on his Barcelona spell to the tune of €36.38m, while Adam Lallana completes the current top 10 after joining Liverpool for just over €34m.

A number of other significant summer moves just fall short of a place in our list. Toni Kroos and Antoine Griezmann both cost a fraction over €33m as they joined Real and Atletico, while Mario Mandzukic – Costa’s replacement at Atleti – is down in 15th with a fee of €24.26m.

Juan Iturbe – at the same price as Mandzukic – is the most expensive signing made by a Serie A side so far, with Roma’s new attacker placed two spots ahead of Alvaro Morata, who joined Juventus for €22.05m. At the same fee, Jeremy Mathieu – the most expensive defender ever over the age of 30 – rounds off the top 20, just ahead of Ciro Immobile, currently the priciest Bundesliga arrival of the summer at €21.39m.

Ivan Rakitic and Jan Oblak both make the top 25 along with Manchester City newboy Fernando, while Iturbe, bizarrely, appears again at No.24 after Hellas Verona initially paid Porto €16.54m to acquire the full rights to the player before his Roma move.