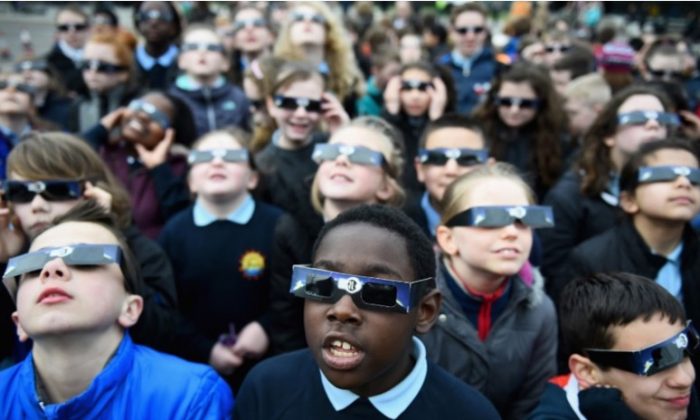 Communities across the United States are celebrating on a large scale as the countdown is on for when the 2017 solar eclipse turns day into night.

While a partial eclipse will be visible for large regions from coast to coast, 11 states fall in the direct path of the total eclipse as it travels across the nation on Monday, Aug. 21. From Coachella-style festivals to speakers from the Vatican Observatory, these communities are ready to party as the skies darken.

Students, teachers, and community members across the Pacific Northwest and around the United States are volunteering to conduct science experiments during the upcoming eclipse in celebration and exploration of the natural phenomenon.

Residents in northern Oregon will have an opportunity to test the ionosphere with a smartphone or ham radio through generating long-distance radio signals. These signals will then bounce off the ionosphere, a level of the earth’s upper atmosphere, which is affected by solar radiation.

When creating a logo celebrating the 2017 solar eclipse, citizens of Idaho Falls may not have realized it would grow into a 10-acre corn maze.

John and Deby Infanger, owners of New Sweden Farms, were inspired by the logo created by the Greater Idaho Falls Chamber of Commerce and have since created a family-friendly activity to commemorate the solar eclipse, which will open Aug. 21.

“We planned it, and we couldn’t see it from the ground at first and (weren’t) sure if it would work,” Deby Infanger told the East Idaho News. “But it looks great. We’re really excited. We really wanted to celebrate the eclipse.”

Residents of Casper, Wyoming, took to social media with the hashtag #EclipseCowboy for the opportunity to celebrate the solar eclipse with astronauts Jack Schmitt and Jim Reilly.

The local Dinner and Discussion event challenged residents to download and color a cowboy coloring page to then be entered in the online contest to win an evening with the two astronauts. The winning contestant along with other attendees will celebrate the solar eclipse with Schmitt and Reilly who will discuss the difficulties of a manned mission to mars and a possible return mission to the moon.

Nebraksa: Visit a ‘Wonder’ of the World?

The pairing of a natural phenomenon with a wonder of the world can be enough of a reason to celebrate. Such is the case for residents of Alliance, Nebraska, whose monument, Carhenge, falls on the path of the solar eclipse.

Carhenge is a structure created from old cars that creates the same visual effect as Stonehenge.

“Some people actually come to Carhenge expecting a mystical magical experience,” head of the Alliance, Nebraska, visitors bureau Kevin Howard told NPR. “Carhenge is whatever you want it to be to you.”

The structure, which falls in the path of totality during the solar eclipse, is free to visit and is expected to attract a large amount of visitors along with the formation of a 30-team softball tournament.

Kansas: Learn From a Vatican Astronomer

Benedictine College, located in Atchison, Kansas, falls in the path of totality and is expecting about two minutes of complete darkness during the solar eclipse. In celebration of the celestial event, an observatory along with a lecture from an astronomer from the Vatican Observatory in Rome.

Those not able to attend the lecture can view the eclipse from the 2,500-seat football stadium, which is now filled. The first 7,500 people will receive complimentary solar glasses.

Missouri: Drink in the Moonshine

North of Kansas City, Missouri, by about 30 miles is the city of Weston, Missouri. This town will be covered in darkness as it falls in the path of totality during the eclipse. How can a community celebrate being in total darkness? Drinking in moonshine.

Holladay Distillery in Weston is hosting Moonshine: Eclipse Watch Party free to the public including throwback treats such as Little Debbie Star-Crunch cookies and Moon Pies.

Illinois: Fly Close to the Sun

The path of totality falls on the southern region of Illinois, while the majority of the state will view the eclipse without experiencing the 2 minutes and 40 seconds darkness. The area of Union County is observing the eclipse through the construction of a sculpture that is designed to be situated in the exact position where the eclipse path of totality passes through.

However to get there? Visitors have to first pass through a jungle.

Land belonging to local business Blue Sky Vineyard lies on this path of totality where a garden pathway has been created and leading to a hill. Once you climb the hill, visitors will see the sculpture titled, “Flying Too Close To The Sun,” which celebrates the eclipse and is created by Alto Pass artist Dan Johnson.

Like many places, they’ve been planning this for a long time.

Andrews, N.C. is one of the towns in western North Carolina that will see totality along the eclipse path.

Families will celebrating together at local schools and parks exploring the skies with hydrogen alpha telescope demonstrations. These week-long festivities last through to the night of the eclipse when the community will be shown on the NASA Megacast livestream of the solar eclipse.

Click here to view the NASA Megacast livestream to view the solar eclipse in your own community.

Tennessee: Party With the Stars

Also falling in the path of totality, Nashville, Tennessee, is bringing out their biggest stars to celebrate as the sky darkens. Total Eclipse Opry is hosting a celebration at the historic stage with legendary country music stars.

The iconic sounds of the Opry will flow through to the next day as a “one-of-a-kind Nashville Total Eclipse” soundtrack plays as the city grows dark under the 2 minutes of totality.

South Carolina: Be a Weekend Warrior

Columbia, South Carolina, is preparing for multiple festivities as it is one of the major cities to view the eclipse as it travels across the state.

Expecting 2 minutes and 36 seconds of totality darkness, Columbia is hosting over 120 eclipse-related festivities in the Midlands region of South Carolina. From baseball games and river paddling to hands-on solar activities for children, and much more, area residents can join in the celebrations as Columbia receives the longest duration of totality on the East Coast.

Is your town not in one of the 10 states on the path of the Great American Solar Eclipse? Click here to see what the eclipse will look like from your hometown. If you are traveling to the celebrations in these cities, people have compiled information on which Waffle Houses across the country have the best view of the solar eclipse. This may be the least expected map of the solar eclipse, but it might be the most delicious.