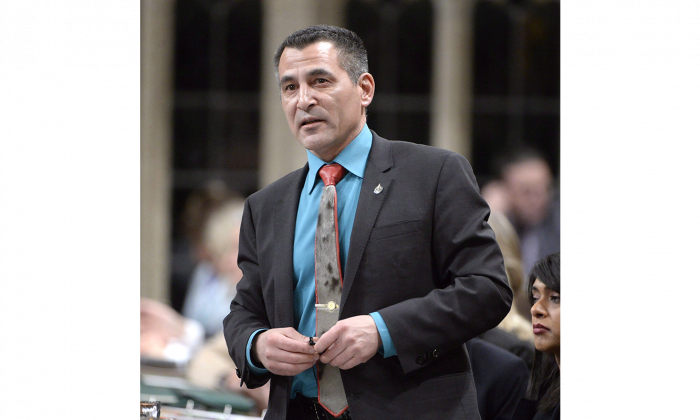 Minister of Fisheries, Oceans and the Canadian Coast Guard Hunter Tootoo answers a question during Question Period in the House of Commons on Parliament Hill in Ottawa, on Feb. 25, 2016. (The Canadian Press/Adrian Wyld)
Canada

Tootoo Meets Constituents After Taking Time Off for Alcohol Addiction

OTTAWA—Hunter Tootoo has been working through “deeply personal and private issues,” the ex-Liberal said Wednesday, July 27, as he resumed his MP duties following two months off to seek treatment for alcohol addiction.

Tootoo, who represents the northern riding of Nunavut, held a news conference at his office in Iqaluit and met with constituents, his first appearance in the public eye since abruptly leaving cabinet and caucus at the end of May.

He said alcohol, which has long posed a challenge to a number of his family members, is often used as a coping mechanism for trauma—and trauma is far too common a plight in aboriginal communities.

“I have personally been affected by those impacts,” Tootoo said, acknowledging that the words of encouragement he received from friends, family, and supporters during the recovery process made a significant difference.

“I am extremely grateful for the patience you have granted me during my healing,” he said.

“I know I let people down—my family, friends, and the people of this riding—and myself. I have work to do to regain their trust and respect. That work begins now.”

I know I let people down.
— MP Hunter Tootoo

In a statement, Tootoo confirmed that the decision to resign his post as fisheries minister and leave the Liberal caucus was his and his alone—a detail Prime Minister Justin Trudeau had already made plain.

However, while wishing Tootoo well in his return to work, the Prime Minister’s Office suggested Wednesday it’s unlikely he’ll be invited to return to the caucus fold any time soon.

“His status with regard to the Liberal caucus remains unchanged,” spokesman Cameron Ahmad said in a statement.

It would be a tremendous loss to the territory if Tootoo is not welcomed back by the government, said Iqaluit Mayor Madeleine Redfern.

Many northerners were proud and excited when Tootoo was elected as a Liberal MP and later named to Trudeau’s cabinet, she said. As an Independent, he would not have access to a party network and the research support it affords, she noted.

“It is important when you’re in a territory with only one member of Parliament to have an effective MP who has access to the government in power, who has access to ministers and the senior bureaucracy, the decision-makers,” Redfern said.

Tootoo said he still respects Trudeau and his government. “I remain just as committed to my work as your member of Parliament,” he said.