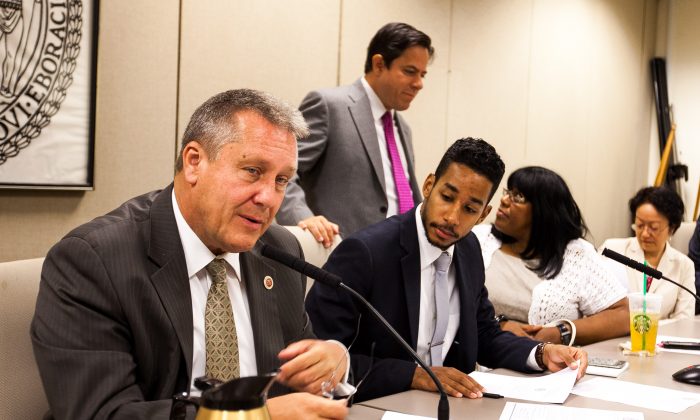 NEW YORK—Prompted by the tragedy of an autistic teen, Avonte Oquendo, who wandered off school grounds and turned up dead in the East River last year, the City Council Education Committee approved a bill Wednesday designed to prevent this kind of misfortune from happening again.

Yet, since its introduction, the bill has been cut so much, it doesn’t require any changes now, short of two reports the city’s Education Department has to produce halfway through next year.

The original bill would equip all exit doors of elementary and special education schools with alarms, triggering a siren whenever the doors are opened.

The problem was, Daniel Dromm, chairman of the City Council Education Committee, explained, different schools have different ways to approach security. Some prefer door alarms, some favor security cameras, others may like a variation of both. When more schools operate in one building, who’s to say what measures are to be adopted? “It was a little bit of a compromise on this,” Dromm said.

Thus, the bill leaves it to the discretion of the department to “evaluate and set priorities for the installation of door alarms” and report back to the council by May 30, 2015.

The department’s spokeswoman Devora Kaye offered a statement praising the council and the bill, but mentioned no specifics on what the department’s priorities are, aside from “constant dialogue with City Council, principals, teachers, and families … to ensure the safety of all students at every school.”

Dromm acknowledged the door alarms alone are just a fail-safe, alerting the staff that someone possibly exited the building. “That’s not what you want to see happen,” he said. “You want to know beforehand.”

That’s why the bill includes a call for “training on student safety protocols” so the staff would get better at monitoring students.

Yet again, the bill doesn’t mandate such training. Instead, it requires the Education Department to produce a report, by May 30 of next year, listing type and scope of training, intended audience, and for whom it was mandatory.

Whether that means the department can also report no training, Dromm couldn’t say.

The bill will be voted on by City Council on Thursday. Then it should be signed into a law by the mayor, which could take a few weeks.