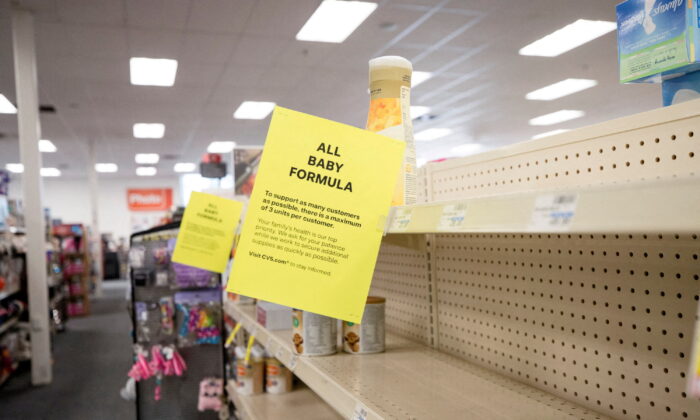 Empty shelves show a shortage of baby formula at a CVS store in San Antonio, Texas, on May 10, 2022. (Kaylee Greenlee Beal/File Photo/Reuters)
US News

‘Too Slow’: FDA Admits Delayed Response to Complaints About US Baby Formula Plant

The U.S. Food and Drug Administration’s (FDA) initial response to complaints about Abbott’s infant formula plant was “too slow” and some decisions could have been “more optimal,” the FDA’s top official said while facing a grilling from lawmakers on Wednesday.

FDA Commissioner Dr. Robert Califf appeared before a congressional panel to answer questions about the FDA’s handling of events that led to the biggest infant formula shortage in recent U.S. history after Abbott in February recalled some products and closed its Sturgis manufacturing plant.

Rep. Diana DeGette (D-Colo.), chair of the panel, raised the question of the “timeline of FDA’s investigation and response,” citing a “four-month lapse before returning to inspect the Sturgis facility,” and a delay in contacting a former Abbott employee whistleblower.

Lawmakers heard that senior FDA officials only saw the complaint in February because of pandemic-related mail routing issues.

Califf acknowledged that the “FDA’s timeliness of interviewing the whistleblower and getting into the facility for a for-cause inspection were too slow. And some decisions in retrospect could have been more optimal.”

“While there are many steps along the way where different actions could have sped up the sequence of events, to this day, I can find no evidence of intentional delay or malfeasance,” he said.

The FDA inspected the plant following reports of bacterial infections in babies allegedly linked to Abbott’s formula, and the whistleblower complaint in late October.

But an investigation by the FDA and the U.S. Centers for Disease Control and Prevention “could not conclude” that the “egregiously unsanitary conditions” at the Abbott plant caused the illnesses in the infants.

“However, we cannot rule it out either. There’s a confluence of events that’s highly unusual. There is no dispute that the facility was unacceptably unsanitary, as evidenced by the consent decree. Frankly, the inspection results were shocking,” he said.

Califf noted that inspectors found cracks in vital equipment, a lack of adequate handwashing, evidence of previous bacterial contamination, and water leaks in areas where formula is produced, a risk factor for bacteria.

It is critical to return the Sturgis plant to safe production of infant formula as soon as possible, Califf said, because Abbott holds the largest market share in America, “leaving it with a responsibility” to produce safe formula “that was not met.”

Abbott did not have a contingency plan to produce its lines of specialty formulas that serve as the only source of nutrition for thousands of babies with metabolic disorders, lawmakers heard.

“We will do everything in our power to work with Abbott to make this happen as quickly and safely as possible. But this timing is in Abbott’s control,” Califf said.

Reflecting on the FDA’s role in exacerbating the formula shortage, Califf cited chronic underfunding of the FDA as one issue that needs to be addressed, hinting that “you will see changes in the future.”

“Our requests for funding and authority are essential in concert with improved operations and leadership,” he said.

For the sake of expediency, the FDA entered a consent decree with Abbott, which allows the company to avoid litigation by pledging to voluntary act to improve and address deficiencies. An outside official will have full oversight of “every single step.”

Abbott said on Tuesday that it planned to reopen the plant on June 4.

Meanwhile, the Federal Trade Commission (FTC) on Tuesday launched an inquiry into the ongoing shortage of formula.

In a statement, the FTC said the inquiry seeks information on the “nature and prevalence of any deceptive, fraudulent, or otherwise unfair business practices aimed at taking advantage of families during this shortage.”

The inquiry also seeks to find out what factors “have led to concentration in the infant formula market and the fragility of the supply chains for these crucial products,” the FTC said.

Reuters and Mimi Nguyen Ly contributed to this report.